The Racist Origins of 'Tipping Point'

Tipping point, which we define as “the critical point in a situation, process, or system beyond which a significant and often unstoppable effect or change takes place,” has achieved a certain degree of cultural ubiquity. This may be attributed to the enormous success of Malcolm Gladwell's book The Tipping Point, published in 2000. Though tipping point is now often used to describe a wide variety of cultural and sociological phenomena, it had a curiously specific, and quite troubling, meaning when it first became popular as a figurative phrase in the late 1950s. 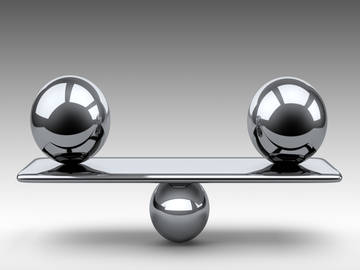 Today, 'tipping point' is most often used to mean “a critical juncture at which unstoppable change takes place."

What brought tipping point into the general vocabulary? Was there a best-selling book that neatly encapsulated a number of psychological theories about human nature? A catchy pop song that contained a line about “the tipping-point of my heart?” Did some doughty politician make an impassioned speech about the Cold War that referenced some imaginary tipping point?

No. The actual origins are considerably less pleasant than any of these scenarios.

When tipping point became popular in the middle of the 20th century, it had already existed in English for a long time as a literal phrase meaning "the point at which a thing would begin to tip over":

The movement was not a concerted one, but reinforcements having arrived another lift raised the car almost to the tipping point, when Chief of Police Scheffer discovered the ruse and galloped amidst the strikers, who quickly scattered.
—Santa Cruz Daily Sentinel (Santa Cruz, CA), 13 Jul. 1894

This combination brought the center of gravity beyond the tipping point and, just as West and a companion named Tillson had gone into the car to get some of the bars, the car toppled over without a moment's warning.
-Rockford Daily Republican (Rockford, Il.), 2Apr. 1902

There are even some examples of figurative use of tipping point in the early 20th century:

Sheboygan Journal: It is an easy thing to get drunk with power, and Governor La Follette seems dangerously near the tipping point.
—Janesville Daily Gazette (Janesville, WI), 9 Dec. 1905

However, when tipping point first began to be employed in general use, it was almost entirely in reference to the propensity of white families to move out of an area when a certain percentage of the neighborhood was composed of black families. It served as a precursor of sorts to the phenomenon of white flight.

Some white parents may reluctantly accept integration to the extent of 10 to 15 per cent.... Exactly when the "tipping point" of white acceptance will be reached will depend upon the attitude of the individual white parent and upon the general white community attitude.
—Homer Bigart, The New York Times, 19, Apr. 1959

The percentage of minority occupancy that initiates a withdrawal of other tenants has been denominated the “tipping point.”
—University of Pennsylvania Law Review, Vol. 107, Feb. 1959

Then, at this “tipping point,” which varies considerably in different situations, the remaining Whites tend to abandon the area quickly.
—Spencer L. Kimball, Michigan Law Review, May 1960

He was told that he was welcome in Village Creek but not on Split Rock Road because his moving there would upset the delicate racial balance since Negro occupancy had already reached the tipping point which might turn Split Rock Road into a “ghetto,” if another Negro family moved in.
—Pittsburgh Courier, 10 Feb. 1962

Tipping point appears to have been preceded slightly by a shorter version of the same phrase, tip point, which was in use from 1957, but which never caught on in the same fashion.

Many people for many purposes have explored how the tip point operates. Real estate operators, seeking the higher revenues that come with Negro overcrowding, talk freely among themselves about “tipping a building” or “tipping a neighborhood.”
—Morton Grodzins, Scientific American, Oct. 1957

Tipping point is what is referred to as an open compound noun, which is a group of words which function together, but are separated by a space when written. Open compounds will often, over the course of time, become closed compounds (also known as solid compounds), as was the case with baseball, which began as base ball.

Point functions as the second half of a large number of open compounds, often indicating that some critical juncture has been reached, or crossed. Boiling point may refer to “the temperature at which a liquid begins to boil” or may also have figurative uses such as “the point of crisis.” Breaking point and flash point have a similar combination of meanings, both literal and figurative.

As the decades rolled on, tipping point began to broaden its application, and was increasingly used in the sense in which we often see it today, without reference to racial panic (although it was still commonly used in its original sense through the 1990s). When Gladwell’s book was published at the beginning of the 21st century, it contributed to the term's increasing use to mean “a critical juncture at which unstoppable change takes place."

This has been your monthly installment of “unhappy beginnings of popular and clichéd terms.”