In contemporary English, temperament and temperature have distinct meanings. Generally, temperament refers to the attitude, mood, or behavior of a person or animal, and temperature to the measurement of how hot or cold something is. In the past, however, these words of different meaning shared a few meanings. With that said, we wonder, did the common denominator temper come to mind? It is in both words, and the word itself suggests "degrees" of emotions ranging from heated anger ("the coach couldn't control his temper and was ejected from the game") to cool composure ("the player was upset but kept his temper"). It's not a bad thought, but temper is not the source of their former synonymity or their origin. 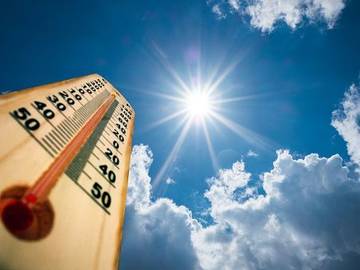 Hot enough for ya?

Temper, temperament, and temperature are all relatives through different Latin borrowings, and all three began with Latin-derived meanings involving such things as moderation, restraint, proportion, balance, and proper mixing. Although they enter English via different routes, they ultimately trace to the same Latin verbal root. From the Latin, their current familiar English senses were tempered. Let's take a gander into the Latin-English mixing that formed the meanings of the words temper, temperament and temperature that are common today.

Origin and Meanings of 'Temper'

Temper traces back to Old English temprian, meaning "to mix with" or "to moderate." That word was borrowed from the Latin verb temperāre, which has multiple meanings including "to exercise moderation," "to restrain oneself," "to moderate," "to bring to a proper strength or consistency by mixing," and "to maintain in a state of balance." Early use of the verb temper reflects its Latin root, as its sense "to dilute, qualify, or soften by the addition or influence of something else" exemplifies. This sense is still frequently encountered today.

Whoever judg'd, the worst on Me must light, / When time shall be; for so I undertook / Before Thee: and not repeating, this obtain / Of right, that I may mitigate their doom On Me deriv'd: yet I shall temper so / Justice with Mercy, as may illustrate most / Them fully satisfy'd, and Thee appease.
— John Milton, Paradise Lost, 1667

Along with co-creator Sam Zvibleman, the stars have a tight rein on the tone of the show, keeping things just in that tragicomic space of silliness tempered with sadness.
— Vanity Fair, 24 June 2019

About the 14th century, the noun form of temper starts being used in reference to a suitable proportion or balance of qualities or to a middle state between extremes.

Virtue is nothing but a just temper between propensities any one of which, if indulged to excess, becomes vice.
— T. B. Macaulay, The History of England, 1848

By the 17th century, temper indicates composure or calmness of mind ("keep/lose one's temper"), a characteristic disposition ("the cat has a good temper"), or a particular state of feeling or mind ("the captain is in a pleasant/foul temper"). Noah Webster in the 1828 An American Dictionary of the English Language noted the specific heated use of temper. Here's the full definition:

Heat of mind or passion; irritation. The boy showed a great deal of temper when I reproved him. So we say, a man of violent temper, when we speak of his irritability. [This use of the word is common, though a deviation from its original and genuine meaning.]

Origins and Meanings of 'Temperament'

Temperament, a 15th-century Latin borrowing of temperāmentum, is next in line. Based on the verb temperāre, temperāmentum evolved as a designation for a mixture of substances in proper proportion, a mean between hot and cold, a compromise between extremes, and moderation. Temperament originated with similar meanings.

… the best-founded commonwealths … have aimed at a certain mixture and temperament, partaking the several virtues of each other state, that each part drawing to itself may keep up a steady and even uprightness in common.
— John Milton, Of Reformation of Church-Discipline in England, 1641

In medieval physiology and natural philosophy, temperament was adopted as a word for the combination of the hot, cold, moist, and dry qualities that determine the nature or quality of a body or plant.

Afterwards you must mind what is the colour of the new born Infant; it is best when the colour is reddish all over the Body, for that by degrees turns daily florid: but those Children that are at first Florid or White, are most commonly of an ill temperament, Cold, Dull, and not long lived.
— John Pechey, A General Treatise of the Diseases of Infants and Children, 1697

The Cacao nut is by temperament cold, and dry, and therefore hath adstringent parts, with which it begetteth Obstructions. Truly that it is dry, seems then sensible: and that it is cold, the universal experience of all, who say it allays thirst incredibly, and cools the Liver or any other inflamed part, seems a pregnant Argument.
— Henry Stubbe, The Indian Nectar, or a discourse concerning chocolata 1662

When it appears in the 16th century, temperature is also so used. By the late 18th century, however, this sense for both words begins to fade.

A similar context in which both temperament and temperature were used synonymously is, again, in medieval physiology in which they name the peculiar or distinguishing mental or physical character of a person as determined by the relative proportions of the bodily humors (blood, phlegm, yellow bile, and black bile) in the body. A student of medieval science asked to name the four temperaments (or temperatures) would correctly respond, "the choleric, melancholic, phlegmatic, and sanguine." This sense of temperature is now obsolete, whereas temperament is still used in this way.

Origin and Meanings of Temperature

As mentioned, temperature rises in the 16th century. It is a borrowing of Latin temperātūra, a word of similar meaning and derivation to the source of temperament, temperāmentum. Like temperament, temperature developed semantically from Latin. For both temperature and temperament, it should be noted, many of their early senses are either obsolete or archaic. Temperature, for instance, was once used to refer to a mixture or blending of elements or to a proper middle course, a mean between extremes, or moderation.

… Aristonides … made a temperature of brass and iron together, to the end, that the rusty iron, appearing through the bright lustre of the brass, might lively express a blushing red in the countenance.
— The Mechanics' Magazine, 1840

Now the first of these … is a proper temperature of fear and love: two affections, which ought never to be separated in thinking of God.
— Thomas Secker, Works, 1811

Although temperature is rarely if ever used in these ways today, the implication of moderation likely influenced people to apply it as a word for the mildness of weather or climate, 16th-century usage that may be regarded as the launching point for modern usage of temperature.

… a Country so favoured by Nature as ours, both in Fruitfulness of Soil, and Temperature of Climate.
—Jonathan Swift, "A Short View of the State of Ireland," 1728

The "mild" sense of the word got cold by the 19th century. Similarly, temperament (also associated with moderation) was used to talk about the weather up until the 20th century.

'Tis a fertile island, and the different heights and situations among its mountains, afford such different temperaments of air, that all the fruits of northern and southern countries are produced there.
— Benjamin Franklin, letter, 2 June 1765

It is in the 17th century that the common meaning of temperature begins to rise in reference to degrees of hotness or coldness on a definite scale. Temperament also rises in this sense around the same time, but it cools down as the 18th century winds down.

Bodies are denominated hot and cold in proportion to the present temperament of that part of our body, to which they are applied; so, that feels hot to one, which seems cold to another; nay, the same body felt by the two hands of the same man, may at the same time appear hot to the one, and cold to the other; because the motion of the insensible particles of it may be more brisk than that of the particles of the other.
— John Locke, Elements of Natural Philosophy, 1750

One final note as we cool down: from the 16th to the 18th century, temperature was used to indicate a characteristic or habitual inclination, frame of mind, or mode of emotional response.

The best Composition and Temperature is to have Openness in Fame and Opinion, Secrecy in Habit, Dissimulation in seasonable Use, and a Power to Feign, if there be no Remedy.
— Francis Bacon, "Of Simulation and Dissimulation," 1625

By the 19th century, temperament was the preferred word, and still is. If you're adopting a dog, you might look for one with a sweet temperament, and if you notice that someone is often anxious, you might describe that person as having an anxious temperament. And if teachers and parents are in awe of your child's drawing ability, you might say your child has an artistic temperament.

Tempering involves softening a hard material, such as steel or cast iron, by reheating it at a lower temperature. By analogy, we reheated the hardened temperament and temperature (and, to a degree temper) to break down their elements of meaning and get to their Latin composition. In the end, they firmly remain the everyday English words that you know with the meanings that you are familiar with.