A Brief on 'Squadron' and 'Squad'

The squad could be on land, at sea, or in the air. 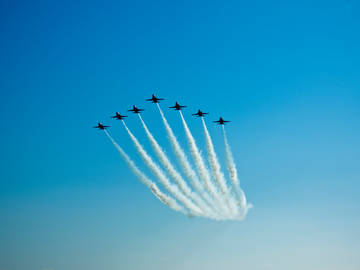 "All wings report in."

Squadron is of Italian origin and is distantly related to Latin quadrare ("to make square"). It marched into 16th-century English as a word for a body of soldiers arranged in square formation (at the time, a sound warfare strategy), but it was quickly adapted as a word for any shaped, small military unit—or numbered, for that matter (the larger, the better). An 18th-century military dictionary defines squadron specifically as "a body of horse, the number not fixt, but from an hundred to two hundred men." Military squadrons also took to the sea, in the 16th century, and the air, in the 20th. The term flying squadron, as well as flying squad, applies to both readied or deployed naval and air military forces. A "flying squadron" or "flying squad" might also be any small standby group (like a police squad) ready to move or act swiftly when called upon. A glum use:

Mr. Boetticher works with the family on the more prosaic aspects, like embalming (a recommended service because of the travel involved), headstone and coffin selection, private events and the burial. His firm mobilizes a Ceremonial Funeral Team, a flying squadron of licensed funeral directors, to assist at local funeral homes.
— Emily S. Rueb, The New York Times, 15 May 2019

By the 17th century, squadron was employed for a relatively large group of people or things. Here's a modern-day example:

Their lineup was below average…. And their pitching depth was completely decimated by injuries, with Justin Verlander throwing in just one game, a bushel of relievers hurting, and a squadron of untested rookies taking their place.
— Zach Kram, The Ringer, 30 Sept. 2020

Origin of 'Squad' and Specific Uses

Squad also joins the English language about this time, via a Middle French word derived from Old Spanish and Old Italian. Its semantic development, unsurprisingly, reflects that of squadron, but it does have a notable sense. The term awkward squad was coined in the late 18th century for a group of military recruits inept at carrying out their duties. Scottish poet Robert Burns didn't trust such a group: on his deathbed, he requested that the "awkward squad" not fire over him. In current British English, it refers to a group of people who tend to express opposition or dissent within an organization, often a political one but not always.

All managers are required to be good at managing people as well as hitting performance targets and keeping within budget. But manager’s work in organisations and organisations have their own ways of doing things. Managers who ignore this risk being labelled a square peg in a round hole. Managers who fight it risk being labelled part of the awkward squad. This explains why some talented managers don’t progress. This also explains why someone of modest talents can rise so far so quickly.
— Blair McPherson, The HR Director 27 Aug. 2020

By the 19th century, the diminutive squad came to refer to any small group. Sir Walter Scott, for instance, wrote of the witches of Auldearne being "so numerous that they were told off into squads, or covines, as they were termed, to each of which were appointed two officers."

To conclude this brief, we present military intelligence on squadron, squad, and related words. A squad is the smallest unit in an army. A group of squads make up a platoon. Two or more platoons make up a company. Naval ships of the same type are organized into a squadron, and such a group of squadrons form a flotilla, several of which, in turn, form a fleet. The basic fighting unit in an air force is the squadron, and a group of flying squadrons form a wing.

You are now dismissed. May the Force be with you.