Why Do We Handle Something 'With Kid Gloves?'

No children were harmed in the making of this article

To handle or treat something with kid gloves is to do so with special consideration or in a tactful manner, often due to a perceived sensitivity.

Kid gloves are simply gloves made from kid leather—in other words, the skin from a young goat. They date from the 18th century, though early ones were often made from the more available lambskin. 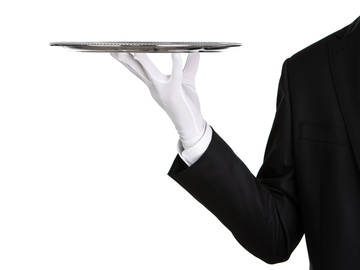 The 'kid' in 'kid gloves' is a young goat, not a young person.

Kid leather is soft and smooth, making it a perfect material for handling objects (such as silverware) without leaving smudges. It was the material used to make the classic white gloves worn by house servants, for example, or by those handling museum artifacts.

Before long, kid gloves were associated with the aristocracy, a staple of foppish characters. The White Rabbit carries a pair in Alice in Wonderland:

It was the White Rabbit returning , splendidly dressed, with a pair of white kid gloves in one hand and a large fan in the other: he came trotting along in a great hurry, muttering to himself as he came, "Oh! the Duchess, the Duchess! Oh! won't she be savage if I've kept her waiting!"
—Lewis Carroll, Alice's Adventures in Wonderland, 1865

To the rougher classes, however, the gloves might have seemed a delicate affectation:

Our faces took the sunburn kindly; our chests gained in compass, and our shoulders in breadth and squareness; our great brown fists looked as if they had never been capable of kid gloves.
—Nathaniel Hawthorne, The Blithedale Romance, 1852

Kid-glove was entered in the 1909 Webster's New International Dictionary as an adjective meaning "wearing kid gloves; hence, characterized by the fastidiousness, daintiness, or delicacy looked for in those who wear kid gloves."

Use of the figurative phrase with kid gloves took hold by the end of the 19th century. The earliest citation shown in the Oxford English Dictionary is from James Bryce, 1st Viscount Bryce in his 1888 work The American Commonwealth, and by the 20th century the phrase connoted timidity or fecklessness:

But in exposing the alliance of Tammany Hall and the unscrupulous corporation managers, [New York City mayor Seth Low] should not have shrunk from mentioning names. This, the most serious menace to the cause of good government, cannot be handled with kid gloves.
—editorial, The Nation, 29 Oct. 1903

I wanted my mother to yell back at me, but she didn't. She turned to my father and spoke very slow. "I don't know," she said. "You raise them with kid gloves and then they walk all over you. What's the point?" She repeated "What's the point?" over and over as she left the room.
—Judy Blume, Then Again, Maybe I Won't, 1986

Though it might be reasonable to hear kid gloves and think of the kind of gloves worn by kids—as in children, perhaps like a mitten clipped to a coat sleeve—it's not clear how many people interpret the phrase this way. On rare occasions we see the phrase altered to a diminutive form, which suggests that children, not goats, may have been what the writer had in mind.

Pack leaders Donald Trump and Texas Sen. Ted Cruz have taken the kiddie gloves off and have finally started to pummel each other, specifically with Trump going after Cruz for being born in Canada.
—Scott Sutton, The Chicago Sun-Times, 14 Jan. 2016

She mixes the news with fearless finger-wagging that's just fun to read no matter the subject. She tackles the industry monoliths without the kiddy gloves and she seems to have command of the beat.
—quoted by Joe Calloway in Magnetic: The Art of Attracting Business, 2015