The History of 'Girn'

'Girn' began as a spelling variant of 'grin', but quickly took on a meaning of its own

Grin developed from Old English grennian—a word related to Germanic grennen, meaning "to snarl," and Old Norse grenja, "to howl." Originally, the word referred to the showing of teeth in pain or anger. (Grinning in merriment or good humor didn't occur until toward the end of the Middle Ages—and presumably it developed from the notion of a forced or unnatural smile.) In Middle English, the word occurred in various spellings, such as gren and gryn. It wasn’t until the early 17th century that the modern form grin was established, and it is believed that the "i" is the result of phonetic development, much like how hint probably came about as an alteration of hent (an obsolete word referring to the act of seizing) and glint as an alteration of glenten (meaning "to move quickly and obliquely"). About the same time, a spelling variant of grin was also established: girn. Girn, however, did not follow the same sense development as grin. 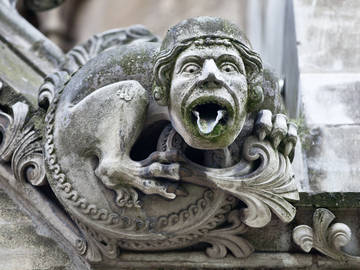 In dialectal British, grin was spelled with the middle two letters transposed since at least the 13th century. Examples of early spellings are gyrn, gern, and girn, and for centuries, they were just as common as grin and its early forms. 16th-century poet Edmund Spenser, for instance, used grin, gren, and gerne at his discretion to create rhyme in The Second Part of the Faerie Queen.

To tear his flesh in pieces for his sin / Which when as Radigund there coming heard, / Her heart for rage did grate, and teeth did grin.

And some of Tygres, that did seeme to gren, And snar at all, that euer passed by: / But most of them were tongues of mortall men …

His face was ugly, and his countenance sterne … And gaped like a gulfe, when he did gerne.

British poets today still have the option to choose between grin and girn, especially if they are from northern England and Scotland, where girn flourishes as a variant of grin.

Murray's body language on court has been fascinating. He mutters constantly and ferociously, he bangs his hands on the racket strings and he smiles or girns at his coaching team.
— Hugh MacDonald, The Sunday Herald, 30 May 2010

They could also use the word in its meanings of "to whine" and "to complain peevishly,” which first appear in the early 18th century and are not shared by grin.

Last week's Programme for Government debate in the Scottish Parliament was a perfect illustration of Sturgeon rolling her sleeves up while her Tory opponents girned to no purpose.
— Joan McAlpine, The Daily Record and Sunday Mail, 14 Sept. 2016

During the 16th century, both grin and girn came to mean "to smile," but for girn, that sense was short-lived: it fell into disuse by mid-18th century. In time, however, girn developed another sense distinct to itself that eventually became associated with making people grin from ear to ear; it developed the meaning of "to make a face" or "to distort one's features."

… they stretch out their faces, and make mouths, and girn at me, and whichever way I look, I see a face laughing….
— Sir Walter Scott, The Heart of Midlothian, 1818

This use of girn became widespread during the 19th century, and by the century's end, it was extended to the making of amusing faces, then to that action as a competitive activity.

Girnin-matches used to be a part of the local sports of Westmoreland. The person who could girn to the judge's satisfaction would get a quarter of a pound of tobacco for a prize.
— The English Dialect Dictionary, 1900

People still girn for prizes today at all levels of competition, from contests at local fairs to world championships, but such acts are usually referred to by the dialectal variant gurn. For example, there is the World Gurning Championships at the Egremont Crab Fair in England (one of the oldest of its kind), where you can see contestants make faces—or rather, gurn—by doing things like projecting their lower jaws forward and up as far as possible and covering their upper lips with their lower lips. In British and Scottish vernacular, gurn is also applied in general to any eye-catching, jaw-dropping distortion of the face.

Showing off the impressive dexterity of her cheeks and forehead, the actress gurned, scowled and gazed wide-eyed into the abyss….
— Ashleigh Rainbird, The Daily Mirror, 4 Feb. 2017

These acts that gurn describe are not unique to the British and Scottish; we’ve all gurned to some degree for amusement. But how would a person convey the action of making faces in one word in American English? It seems gurn would be a useful (and fun) word to adopt into American English.