The Origin of 'Refugee'

The word originally referred to the Huguenots

Refugee comes from a tangled web of related words, and though they show a certain family resemblance, these words are also fiercely independent. Their shared roots go all the way back to Latin, but refugee came directly from the French word réfugié with a very specific meaning: it referred to Protestants who fled France following the revocation in 1685 of the Edict of Nantes, the law that granted religious liberty and civil rights to the Protestant Huguenots for nearly a century. Over 400,000 French Protestants left France in the following years, many to Protestant England. 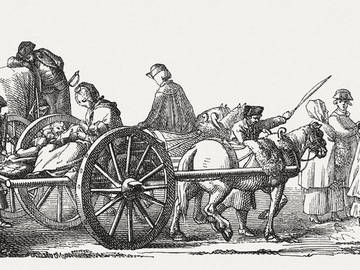 'Refugee' came directly from the French word 'réfugié' with a very specific meaning: it referred to Protestants who fled France following the revocation in 1685 of the Edict of Nantes.

Within a decade, refugee was being used more generally in English to refer to anyone who was forced to flee to a place of safety, often because of danger or persecution because of religious or political beliefs: indeed, an early use of refugee specifically referred to a band of loyalist guerillas from Westchester county, New York, who fought for the British during the American Revolution. These Tory marauders were also derisively called cowboys—decades before the term would get a new meaning accompanying westward expansion.

That place of safety sought by refugees could be called a refuge, a word that had been around for centuries by then. It came from the Latin word refugium, a noun that meant “the act of taking refuge” or “a place of refuge or asylum.” Refuge kept the senses of its Latin root intact, and can mean both a literal “shelter” and a figurative “sanctuary.” Refugium came from the verb refugere (“to run away” or “to escape”), itself formed from fugere (“to flee” or “to avoid”).

The figurative use of refuge was famously used by the great lexicographer Samuel Johnson, who famously quipped: “Patriotism is the last refuge of a scoundrel.”

The idea of fleeing is part of other words that share fugere as their ultimate Latin root. Fugitive was used both as a noun (“one who flees or escapes”) and adjective (“fleeing”) but, with time, became less literal to also mean “wandering” or “moving from place to place” without the urgency or danger of escape. From there, fugitive took on more figurative meanings such as “elusive” (“fugitive ideas”) or “likely to change” (“fugitive colors”). It can also mean “of a short duration,” a synonym of “fleeting”:

Taggart's and Halsey's voices, hesitant and estranged from each other by the slightest Auto-Tune tweaks, unite in a fugitive moment of release, the way an ignored car payment might make a girl feel rich for one self-indulgent weekend.
—Ann Powers, NPR.org, 24 August 2016

Interestingly, as fugitive softened in meaning, refugee hardened by adding a meaning synonymous with fugitive, “one who flees from justice,” in the late 1700s.

Finally, fugue, the musical composition that gives the impression of one melody chasing another, also comes from fugere. Fugue more recently developed a psychological meaning, referring to a state of disturbance when a person might do things that they can subsequently not recall—sometimes called a “fugue state.”

All of these different meanings from a single Latin root show once again that the only constant in language is change, and when a static root enters a dynamic language, tempus fugit.