In the lightning-paced world of contemporary news media, we seem to get no end of the hot take.

Still, this is a show that was promising in its first season, delivered on that promise in season two, and then only got better this year, to the point where declaring it TV’s best drama no longer feels like a wincingly hot take.
—David Sims, The Atlantic, 11 Oct. 2016 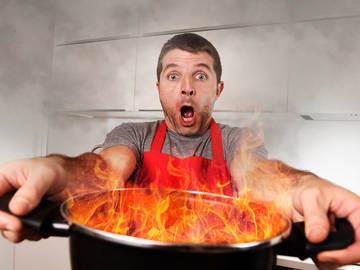 A 'hot take' is a published reaction or analysis of a recent news event that doesn't offer much in the way of deep reflection.

Loosely speaking, a hot take is a published reaction or analysis of a recent news event that, often because of its time-sensitive nature, doesn't offer much in the way of deep reflection. It's sort of like a batch of brownies from the oven—ideally, you ought to let them cool a bit before you serve them, but you just can't help yourself.

It's not a stretch to see where hot take comes from. We define take (sense 5) as "a distinct or personal point of view, outlook, or assessment

The most relevant sense of hot is likely that found at 6a : "of intense and immediate interest

Opinions about hot takes are almost as prevalent as hot takes themselves. At The New Republic, Elspeth Reeve writes that the term hot take "is an increasingly popular way to dismiss the value of a piece of writing—bad, stupid, disingenuous."

Slate editor Julia Turner, in a piece defending hot takes, called them "the most unfashionable thing in journalism" and the term "a commonplace putdown."

Citing a post originally published on The Awl by John Herman, Turner writes, "In an online journalism environment where social media drives a lot of traffic, and thus revenue, Herrman explained, these swift, provocative, and socially shareable reaction posts can be good for the bottom line."

At The Dish, Andrew Sullivan writes:

The Internet media is exploitative and unkind to its greenest employees. Most of the Takes are written by 20-somethings making a (comparative) pittance. The Take is barely, if at all, edited. The young Take-producer is given no time to learn to report, or to read anything other than Everyone Else’s Takes. Dozens of aspiring journalists now have clips files that consist of hundreds of these awful aggregated units of completely disposable Content. Here’s 80 words on something James Franco did. Here’s 100 words on ISIS. This is my link to a Daily Mail story about long-lost twins who married each other.

While the phenomenon of the hot take might have been popular subject fodder in 2014, the term appears to be older—Reeve alludes to its use in sportswriting—and while it might not have preceded the existence of the Internet, it may have come about before the rise of the Internet news media as we know it:

"The hot take on Clinton by the electorate is that this guy's out there busting his can. The BosNyWash puke-funnel view of the world is entirely different and entirely wrong. They believe: 'Well, look at this, he's out there campaigning. Why is he doing that?' But people think that the president ought to be working and pushing something. They say it's good that Clinton's out there trying to change things."
—James Carville, quoted in Rolling Stone, 13 May 1993

Carville's use of hot to modify take might lean closer to "popular" than "of immediate interest." In any event, don't ask us to define puke-funnel. That would be too hot a take, even for us.