Does 'orientate' have an unnecessary extra syllable? Yes. Does that make it not a real word? No.

Are you the kind of person who adds unnecessary syllables to words, and if so, how can such a condition be diagnosed? Is it that otherwise friendly dogs growl and snap at you? Do flowers wilt, and milk curdle, when you walk past? Or have you simply noticed that people say things like “it’s orient, not orientate.” 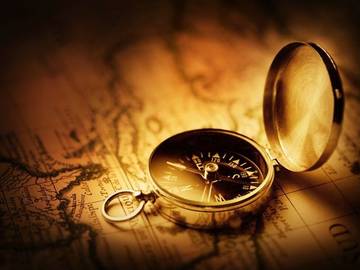 'Orient' has been a verb since the early 18th century, while 'orientate' dates from the middle of the 18th.

Is orientate the illegitimate cousin of the noble orient? Should we retrieve the Linguistic Banishing Rod, and exile orientate to the purgatorial wastes of ‘words which dared to have more syllables than they truly needed’? There is, we regret to inform, no Linguistic Banishing Rod. And given that Merriam-Webster is always ready to defend the indefensible (as long as the indefensible is supported by a certain amount of citational evidence, drawn from a chronologically and geographically significant portion of written use), it may come as no surprise that orientate doesn’t bother us all that much.

‘But it has an unnecessary syllable!’ wails the chorus. This is true: orientate does effectively function as a synonym of orient (“to face or turn to the east” or “to direct something toward the interests of a particular group”), and it does take slightly longer to say and write. It is not uncommon for words in English to have variants which are slightly longer than they need to be, and our collective response to these words is somewhat capricious; some of them make people Very Angry (irregardless, conversate, preventative), while others (commentator) seem to elicit little more than a shrug.

We don’t always prefer the shorter word, and if we look back some time, we can find other cases where the shorter version, which came first, lost out to the longer word. Originate, now very much in common use, was preceded slightly by the verb origin (meaning “originate”), now very much obsolete.

And as from the soule the Sences are origined, and from that essence result your passions; so in like sort from wisedome resulteth vnto King, and Kingdome, all that good and happinesse that can be desired.
— Juan de Santa María, Christian policie, 1632

So Saint Paul here, not onely names him, but originates his name.
— Richard Clerke, Sermons Preached, 1637

In the case of orient and orientate the shorter word came first; orient has been a verb since the early 18th century, while orientate dates from the middle of the 18th. Many of the early citations that we have for orientate show the word used in scientific writing.

The titanic iron is not as a rule abundant, and for the most part appears in long slender rods often parallel among themselves over a limited area, and sometimes orientated by the chrysolite.
— Edward S. Dana, The American Journal of Science, 1889

It brings home to the mind, in an admirably pictorial form, the fact of the remarkably careful orientation of the structure by its unknown builders, and that we have, in fact, in Stonehenge the remains of a gigantic edifice which was orientated to the solstitial sunset place as seen on Salisbury Plain.
— The Leisure Hour (London, Eng.), Nov. 1891

The word is not exclusive to the province of technical prose; by the early and mid-20th century orientate is often found in a wide range of styles.

What parting gifts could give that friend protection,
So orientated, his salvation needs,
The Bad Lands and the sinister direction?
— W. H. Auden, The New Republic, 25 Nov. 1940

… the propaganda of the period has to orientate itself in relation to these landmarks ….
— Aldous Huxley, The Olive Tree, 1937

She was only standing there to catch her nervous balance, to orientate herself.
— Tennessee Williams, The Roman Spring of Mrs. Stone, 1950

Orientate began to attract criticism in the 1940s, and is still considered suspect by some usage guides (particularly in the U.S., as the word is far more common in British English). We give no usage label for orientate; it is not colloquial, informal, or slang. It is up to you whether you choose to use it (incurring the wrath of the members of the syllable preservation society) or orient.