Is it any clearer now?

An optometrist measures and assesses eyesight and prescribes corrective lenses. Ophthalmologists are physicians who specialize in the structure, function, and diseases of the eye; they treat ailments and can perform surgery. Opticians craft and sell corrective lenses. Finally, oculist is an uncommon catch-all term for eye-related professions.

What's the difference between an optometrist and an ophthalmologist? What about an optician and an oculist?

The fact that there are four different kinds of vision practitioners with occupational names beginning with the same letter can lead to a lot of confusion about who does exactly what. It's not uncommon to see the names of an optometrist and an optician, for example, alongside each other on the directory of a doctor's office. Plus there is often an overlap in the kinds of services they provide. 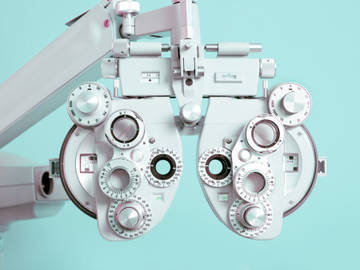 We hope this makes your understanding of these words better, not worse.

An optometrist specializes in optometry (obviously), and the ending –metry—related to meter and measure—should provide the hint that much of the job of an optometrist is about measuring and assessing. An optometrist tests the eyes for defects and determines when corrective lenses are needed, and may also sell and fit those lenses. Optometrists can also prescribe therapeutic exercises to improve problems in vision, and in some instances (often depending on the state in which they practice), they can prescribe medication.

To become an optometrist, you don't need to be a physician (a Doctor of Medicine, or M.D.), but you need a Doctorate of Optometry, obtained by way of a four-year postgraduate professional program.

An ophthalmologist specializes in ophthalmology—the branch of medical science dealing with the structure, functions, and diseases of the eye. Unlike an optometrist, an ophthalmologist is a physician. Ophthalmologists can do vision tests and prescribe corrective lenses just like optometrists. But their chief specialty is diagnosing and treating aliments, such as glaucoma or cataracts, and they can perform surgery.

In optician one sees the familiar adjective optic, meaning "of or relating to the eye" (as in optic nerve). The optician deals in the making and selling of the glasses (or contact lenses) that are prescribed by the optometrist or ophthalmologist.

The term need not be limited to those who only sell lenses for vision correction, however. Optician can refer to one who works in the trade of crafting and selling lenses for other optical instruments, such as telescopes.

And then there is more literary word oculist, which is probably not the first word to which one would turn when describing one in the profession of vision correction. That is probably because the specific skill sets that apply to optometrist or ophthalmologist are glossed over by oculist, which in general use can refer to either of those titles.

In F. Scott Fitzgerald's novel The Great Gatsby, the narrator Nick Carraway uses oculist to refer to the occupation of Dr. T. J. Eckleburg, whose billboards are found in the Valley of Ashes between West Egg and New York City. The weathered signs show the face of Dr. Eckleburg, whose eyes are "blue and gigantic" and look out from "a pair of enormous yellow spectacles":

Evidently some wild wag of an oculist set them there to fatten his practice in the borough of Queens, and then sank down himself into eternal blindness, or forgot them and moved away.
— F. Scott Fitzgerald, The Great Gatsby, 1925

While optometrist, ophthalmologist, and optician all ultimately find their roots in Greek (the same ops that is Greek for "eye" is found in Cyclops), oculist derives straight from the Latin word for "eye," oculus.