Everyone has their own personal arsenal of linguistic peeves. Even the least-judgmental among us are prone to such complaints on occasion. Some of these are mild, and provoke in the peeved nothing more than a sigh of exasperation or a raised eyebrow. And then there are words such as enormity. The defenders of the purity of enormity tend to take their jobs very seriously, and raise more than eyebrows. 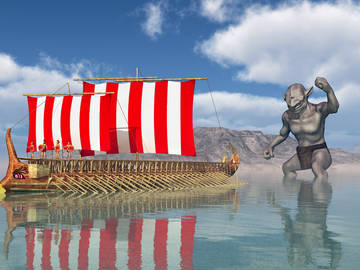 People have used 'enormity' to mean "great size" for almost 400 years. The many people who still object to this usage might benefit from a lesson on the actual history of the word.

In case you are as of yet unaware of what the issue is here, some people use enormity as a synonym for enormousness (“great size”), and a number of other people wish that they wouldn’t, since the "proper" meaning of enormity is thought to be “great evil or wickedness.” Usage guides often weigh in on this subject, in admirably measured prose, and tend to recommend using enormity for “evil” and enormousness for “great size.”

We may speak of the enormity of a person’s crime, but if we want a noun to express vast size we should use enormousness or vastness.
-Don LePan, The Broadview Book of Common Errors in English, 5th ed., 2003

enormity - It denotes wickedness or outrageousness in addition to size. Use enormousness to mean great size alone.
-Paul Martin, The Wall Street Journal Essential Guide to Business Style and Usage, 2003

So there you have it. Case closed. Except that if we should not use enormity to mean “large size,” on the grounds that the original meaning was “great wickedness,” shouldn’t we check what the original meaning of enormousness was, just to be on the safe side? Here are a handful of citations of that word in its first few decades of use.

What is the best course to be taken to avoid so horrible a sin? Surely, even 1. To avoid even the first motions or occasions, and so lesse endangered to fall into the enormousnesse thereof.
-William Slayter, The Compleat Christian, 1643

O horrible! that the enormousness of the action should be that which Authoriseth the crime, and justifieth the criminal.
-C.H., Mutatus Ploemo Revised, 1650

It would appear that enormousness did not begin to be used to refer to “great size” until the 19th century, after having been used for “wickedness” or “deviation from a normal course” for almost 200 years. At some point, everybody began using enormousness to refer to size, instead of evil, and the next thing you know...wait a minute, that sounds vaguely familiar.

Also, am I the last person on Earth to think that "enormity" does not mean "enormousness"? https://t.co/dDUAp3fbA3

We have all been using the word 'enormity' incorrectly. It does not mean enormousness but 'outrageous or heinous character; atrociousness'

It would seem that enormity is taking the same route that enormousness did, at least insofar as its semantic drift is concerned. Furthermore, if the comments by the above members of Twitter are in fact correct, the newer meaning is beginning to supplant the older meaning.

It is worth pointing out that if “we have all been using” a word in a certain manner, or if that use (or misuse) is “near universal,” then that word has now taken on a new meaning. It can be tempting to say that an overwhelming majority of the population is using a word in the wrong fashion, but that’s not quite how language change works; it is a fairly democratic process, and tends to follow the use of the majority, rather than the directives of the few.

You should bear in mind, should you decide to use enormity to refer to the size of your bar tab, that there will be people who think less of you (or less of your language) because of this. It is up to you to decide whether or not you feel comfortable with incurring the wrath or scorn of these people. And while we feel that there is sufficient evidence of enormity being used in reference to size to merit an additional definition for this, we are not insensitive to the fact that this annoys some people.

So by way of mollification we can offer the annoyed some historical context: if you still believe that this is a misuse of the word, it is a very old one, having existed for almost 400 years now. Thomas Elyot, in a translation of Plutarch from 1532, employed enormity quite clearly to indicate the extreme size of a thing (in this case it was the Cyclops Polyphemus, “who excelled al the other in enormitie of stature”).

If you’re still annoyed, you can take it up with Elyot on Twitter.