What Does It Mean to Be 'On Tenterhooks?'

The suspense is killing us.

The phrase "on tenterhooks" means "waiting nervously for something to happen." A tenterhook is literally a sharp hook that fastens cloth to a tenter, a frame on which cloth is stretched, like a tent, for even drying to prevent shrinkage. The phrase compares the tenseness of the fabric to the feeling of being very tense.

When someone is in a state of uneasiness or suspense, you might say that person is on tenterhooks. 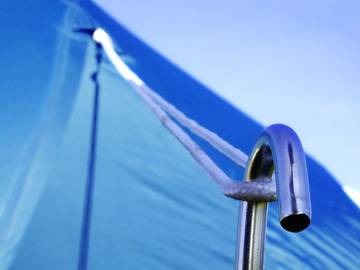 We're on the edge of our seats to learn more.

But where did we actually get this phrase?

A tenterhook is defined as "a sharp hooked nail used especially for fastening cloth on a tenter." Oh, okay. Glad that's settled. Hey wait ... what's a tenter? Well that's a frame on which cloth is stretched to dry evenly, often to prevent it from shrinking.

The word shares its origin with that of our word tent—the Latin tenta, the feminine past participle of the verb tendere, meaning "to stretch." A tent, of course, consists of a fabric stretched over poles and sometimes pinned to the ground.

The notion of being stretched informs what is sometimes a metaphorical use of tenterhook:

Having noticed this ritual a number of times, I could see, however, that, when walking, her body was taut, as if stretched on tenterhooks.
— John Berger, Harper's, September 2010

Being stretched, of course, leaves fabric very tense, as one's muscles are when one is feeling stressed or uneasy. And so to be "on tenterhooks" is to be similarly tense as one waits in suspense.

Atticus chuckled. "She earned it, so don't feel too remorseful." I waited, on tenterhooks, for Uncle Jack to tell Atticus my side of it. But he didn't. He simply murmured, "Her use of bathroom invective leaves nothing to the imagination."
— Harper Lee, To Kill a Mockingbird, 1960

The week did not improve as it progressed: Harry received two more D's in Potions, was still on tenterhooks that Hagrid might get the sack, and could not stop himself from dwelling on the dream in which he had seen Voldemort…
— J. K. Rowling, Harry Potter and the Order of the Phoenix, 2003

The noun tenter itself was also, at one time, synonymous with tenterhook, and consequently the phrase on tenters turns up in texts from the 17th and 18th centuries, but is almost never seen today.

Occasionally you might see tenterhook spelled as tenderhook, usually by writers who are unfamiliar with the origin of the phrase, a spelling certainly influenced by the more familiar and unrelated word tender. Just about all usage guides regard this as an error, even if it does sound like a much gentler experience.