The Unsettling History of 'Off-putting'

A word for the repellent and disconcerting

We so often speak of words we consider off-putting (such as moist, irregardless, and hopefully used as a sentence adverb) that we never really pause to consider the word off-putting itself. 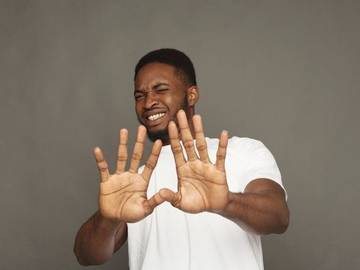 "Please don't clip your nails in the office."

Well before off-putting was the word of choice to describe your ex’s manner of chewing their toast, or the color the previous tenant of your apartment painted the bathroom, it had another meaning, which was “procrastinating, dilatory.” This sense, now quite uncommon, is mostly found in Scottish use between the late 19th and early 20th centuries.

But your real appreciative “aff-pittin’ creaturs” delay over the agreeable as well as the disagreeable things, just as a child will leave the sugar off a cake until the very last bite.
— Dundee Courier (Dundee, Scot.), 19 Jun. 1930

I have a friend, a very brilliant women, who told me once she was born possessing what the Scotch call the most “aff-putting” disposition in the world, that is to say, she invariably forgot things; letters went unanswered, invitations lost, messages undelivered, calls unpaid, and she said she had written in large text, and put over her writing bureau, the following words, “Do it at once!”
– Evening Telegraph (Dundee, Scot.), 22 May 1901

Mr Cross described the letter as a very off-putting one, and the chairman agreed that it certainly was that.
— The Scotsman, (Edinburgh, Scot.), 19 May 1932

The current sense of off-putting (which we define as “that puts one off; repellent, disconcerting”) is a fairly recent addition to our catalogue of ways of saying “yeech.” It began to see use in the 1930s, and for at least the first decade or so of use appears to have been viewed by some as slang.

A Dundee joiner and builder, Charles Gray, Graham Street, was described as “obstinate, obdurate, and off-putting” by Sheriff-Substitute Malcolm at Dundee yesterday, when he pleaded guilty to having failed to maintain a reasonable temperature in a room in his factory.
— The Scotsman (Edinburgh, Scot.), 9 Feb. 1938

Dogs larger than life and not friendly, if you know what I mean. And the curious position of the deer! Rather off-putting at breakfast, I should think.
— Punch (London, Eng.), 1 Nov. 1939

A famous firm brought out a white chocolate and had to withdraw it from the market. I tried some of it. It tasted grand if you shut your eyes, but the look of it can only be described by the slang term “off-putting.”
— Derby Daily Telegraph (Derby, Eng.), 28 Sept. 1942

Put off has existed as a verb for a very long time in English (since at least the 14th century), with the meaning of “disconcert.” Oddly enough, however, the verb sense of offput (meaning “to be disconcerted”) is quite new, in use only since the 1960s. This word is a back-formation from off-putting.

We tend to not use other -putting compounds as adjectives in this way; inputting functions mainly as a verb, and onputting is found little, if at all, in writing. Off-putting is thus frequently called upon to serve as the word with which people describe things perturbative. We hope this brief potted history of the word will serve in some small way as balm for those occasions when you need to refer to irregardless or your old coworker's weird laugh.