On Notional Agreement, the Majority Speak

Most English speakers know the basic rule of subject-verb agreement: a singular noun takes a singular verb, and a plural noun takes its corresponding plural.

The student is in the cafeteria.

The students are in the cafeteria.

The same rule applies when the construction is inverted:

There is a student in the cafeteria.

There are students in the cafeteria. 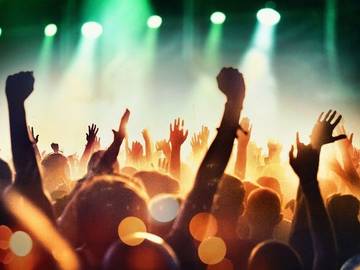 "A crowd of revelers were approaching." Or 'was' it?

Simply put, notional agreement occurs when the agreement between a subject and its verb (or, in some instances, a pronoun and its antecedent) is determined by meaning rather than form.

For example, when you have a compound or plural subject that works as a singular unit, it sometimes sounds more "natural" for that subject to take a singular verb, in spite of formal rules to the contrary.

This would apply, for example, to nouns that are often combined and presented together:

There is leftover macaroni and cheese in the refrigerator.

Track and field is her favorite sport.

And to amounts presented abstractly as unit quantities:

Ten dollars is the cost of admission.

Is five miles too far to walk?

It also works for nouns that are spelled in a plural form but represent something with a singular nature. This is particularly common in the case of nouns referring to areas of study, like politics, civics, or economics:

Politics is best not discussed at the dinner table.

Simple economics determines how much something costs.

Alternately, you will frequently see instances where a plural verb is used with a singular noun that, because of its meaning and context, suggests a plurality. Such nouns include pair, trio, crowd, family, crew, mob, generation, and committee. You might see a sentence such as "The pair were seen leaving in a gray car" or "The crew were preparing for the launch," where what are normally singular subject nouns (pair and crew) are paired with a plural verb (were).

Ultimately, context comes into play, with the sentence usually offering some kind of information that emphasizes the plural essence of what is technically a singular noun. By "The pair were seen leaving in a gray car," one can intuit that two people were seen; similarly, "The crew were preparing for the launch" brings to mind many people working together, suggesting a plurality, and it's that notion that leads a speaker to prefer a plural verb.

More common are constructions that "set aside" a singular noun from its plural members (as in the model "a [collective noun] of [member nouns]). With these subjects, speakers and writers will frequently opt to express the verb in the plural:

A majority of the voters support the amendment.

There are a handful of good reasons for us to go.

A committee of volunteers were selected.

In addition to notional agreement, there's a second principle at play here that makes the use of a plural verb sound more "correct" than the singular verb, and that is what is known as the principle of proximity. That means, for example, that in a construction such as "a crowd of revelers," one might be more inclined to select a verb form that agrees with the plural noun that is closer in the sentence to the verb (revelers) rather than the more distant singular noun (crowd):

A crowd of revelers were approaching.

Notional agreement is something to which we don't often pay notice because it's almost instinctive, a part of our regular speaking habits. And it's not a set rule in its own right, but rather a matter of preference, and it's more common in British English than American English. If you preferred to say "a crowd of revelers was approaching," you wouldn't be wrong.