The Sweet Truth About 'Nonpareil'

It's not French anymore

Nonpareil wears its French heritage in its spelling, but, strangely enough, a French person probably wouldn’t understand you if you tried to use it in conversation today. In the more than 500 years since it began to be used in English, the meanings we know have dropped out of common use in French. 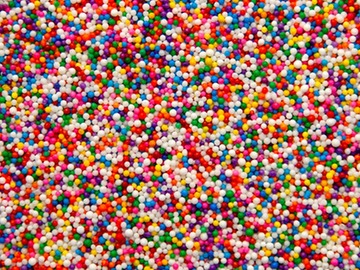 In English, 'nonpareil' means "having no equal" or “a small flat disc of chocolate covered with sugar sprinkles." In French, it doesn't mean much of anything anymore.

In English, nonpareil is pronounced \nahn-puh-REL\ and means “having no equal” as an adjective or, as a noun, “someone or something that is better than any other” or, more deliciously, “a small flat disc of chocolate covered with sugar pellets.”

It comes from the French word words non, meaning “no” or “not,” and pareil (its feminine form is pareille), meaning “same” or “similar” as an adjective or “equal” as a noun.

The ultimate Latin root of pareil is par, which is also the ancestor of the English words pair (“two like things”), peer (“one that is of equal standing with another”), and par (“an amount taken as an average or norm” or “equal”). The literal meaning of nonpareil, therefore, is “without peer” or “peerless.” The word compare also has par as a root, along with com- meaning “with”; its literal meaning is “with [its] equal” or “to couple together,” that is, put two things side by side.

The adjective nonpareil is archaic in contemporary French. As a noun, it means “a small North American sparrow” or a type of pink carnation—both are fairly rare technical uses. The “chocolate candy” sense originated in the name of a small almond candy, covered in hardened sugar, which was known in France in the late 1600s and mentioned in Madame Bovary (1857), but this meaning of the word has fallen completely from use in French.

Nonpareil is pronounced \nohn-pah-rehy\ in French.

Today, a French person who wants to say “having no equal” would say sans pareil, pronounced \sahn-pah-rehy\ .