A Note on the Nonbinary 'They'

It's now in the dictionary.

We recently announced the addition of the nonbinary use of they—that is, they as it's used to refer to a single person whose gender identity is nonbinary—and a lot of people had some questions, "why?" being primary among them.

The answer to that question is no different than it is for any other word. All new words and meanings that we enter in our dictionaries meet three criteria: meaningful use, sustained use, and widespread use. Nonbinary they has a clear meaning; it's found in published text, in transcripts, and in general discourse; and its use has been steadily growing over the past decades. English speakers are encountering nonbinary they in social media profiles and in the pronoun stickers applied to conference badges. There's no doubt that it is an established member of the English language, which means that it belongs in Merriam-Webster's dictionaries. 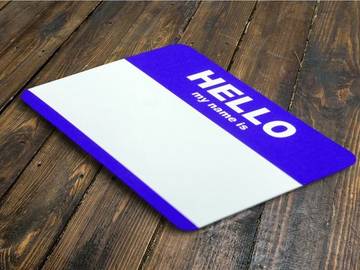 Nonbinary they takes a plural verb, despite its singular referent, which can make the grammatically conservative uncomfortable. It's helpful to remember that the pronoun you was initially plural, which is why it too takes the plural verb even when it's referring to a single person. "You are" has, of course, been perfectly grammatical for centuries, even when the "you" is an individual.

The language's lack of an exclusive gender-neutral pronoun is a famous deficit, and they has been quite ably filling in for more than 600 years. Its use largely goes unnoticed in such constructions as "No one has to use it if they don't want to"—a use that has long been covered in our dictionaries—and it's quite possible that the nonbinary they is headed for a similarly unremarkable fate.