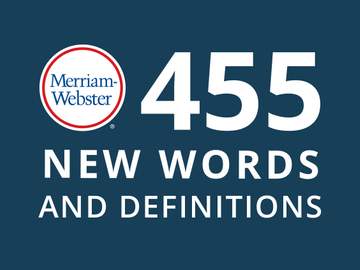 Just as the language never stops evolving, the dictionary never stops expanding. New terms and new uses for existing terms are the constant in a living language, and our latest list brings together both new and likely familiar words that have shown extensive and established use.

Words from Online Culture and Communication

We’ve been communicating online for decades now, and pandemic-related circumstances have only increased the practice. The quick and informal nature of messaging, texting, and tweeting has contributed to a vocabulary newly rich in efficient and abbreviated expression.

As we all know, the pandemic story isn’t over, and neither is the need for more vocabulary to describe the policy and research developments connected to COVID-19.

Words from Tech and Science

We have arrived at the stage in digital technology when we require words for the decay of files, opportunistic attacks on computer programs, super shortcuts, and massive quantities of data storage. The promised ubiquitous jetpacks have yet to arrive, but at least we do have small private satellites and shapeshifting puddles named by Dr. Seuss.

The words connected with how we advocate for political positions and engage with opponents tell us much about the state of partisan politics today. Terms of blame and deception are notable in this batch of terminology.

Many new food terms come from the cuisines of cultures that speak a language other than English, but this batch also features a venerable and all-American regionalism, along with new ways of cooking and organizing food preparation.

Words from the World of Medicine

Fan culture, enduring slang terms, and fashions that may come and go while leaving terms that live on in references: these are just some of the ways that words that aren’t used in news coverage or scientific journals make their way into the dictionary.

From business to sports to home security.

For the previous batch of new words, check out our January 2021 additions.