We've been at it again: the Merriam-Webster.com dictionary has gotten bigger, this time by over 250 new words and definitions. These terms have shown themselves to be fully established members of the language, some after hanging about on the fringes for decades, and others after proving themselves too useful to ignore in relatively short order. All have demonstrated significant use in a variety of sources, making them words our readers expect to find in the dictionary. As always, the expansion of the dictionary mirrors the expansion of the language, and reaches into all the various cubbies and corners of the lexicon. 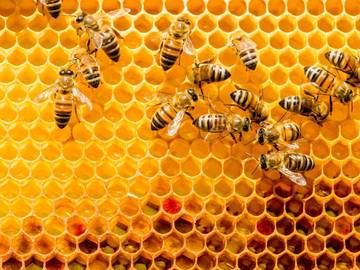 Among the new entries: 'hive mind,' 'froyo,' 'Internet of Things,' and 'schneid'

New vocabulary is the spice of life, and among this group of new additions is sriracha—the pungent hot pepper sauce now appearing on even diner counters where only ketchup formerly reigned—and another spicy (and sweet) newcomer, Saigon cinnamon, also known as Vietnamese cinnamon. You might try the former on bibimbap, a Korean dish of rice with cooked vegetables, usually meat, and often an egg, either raw or fried, and may we suggest a choux pastry as dessert? Be warned: Callery pear may sound like a nice fruit, but it is not recommended for consumption. And some of you may now feel better about calling frozen yogurt froyo, if a dictionary's official sanction makes this version of the term go down more smoothly.

The Internet of Things is something that's promising to make all kinds of tedious tasks go down more smoothly with information being sent to and received from household objects and devices—say, your bedroom fan or your toaster oven—using the internet. Also frequently (but not necessarily) internet-related we have a new sense of troll meaning "to harass, criticize, or antagonize (someone) especially by provocatively disparaging or mocking public statements, postings, or acts," and the threat of ransomware, which is malware that requires the victim to pay a ransom to access encrypted files.

Both practical and theoretical medical advances are represented in terms like cardioverter, which refers to a medical device used to administer an electric shock to restore normal heartbeat, and working memory, which contrasts with long-term and short-term memory in referring to memory that involves storing, focusing on, and manipulating information for a relatively short period of time (such as a few seconds)—kind of like the RAM in your computer.

The term onboarding has sidled in from the business world with its first and primary meaning still firmly in that realm—"the act or process of orienting and training a new employee"—but it's developed a couple other meanings along the way, one having more to do with technology than business. And pregame has ventured from its transparent adjectival meaning into new territory: as an informal verb meaning "to begin drinking alcohol before an event or activity (such as a party or a night out)." Also taking on new meaning is the very old world front. As a verb, front is now also used informally to mean "to assume a fake or false personality to conceal one's true identity and character."

Other contributions are from the world of sports: bunny is a basketball term referring to an easy shot taken close to the basket, and face mask in American football refers to a penalty imposed for grabbing and pulling an opponent's face mask during play. Another sports term that's found its way into the Merriam-Webster.com dictionary is schneid, a slang word that refers to a losing streak and has its origins in some German phrases disparaging tailors.

With politics seeming to be ever-prominent in the public's mind, terms like alt-right and dog whistle are not surprising additions. The latter began, of course, as something only for canines, but in political contexts it now refers to an expression or statement with a secondary meaning that only a particular group of people is intended to understand. We've also added two terms having to do with carrying firearms in public: concealed carry and open carry.

And sometimes a biological term develops a second life as something analogous and less specific, as we see in the case of hive mind; what began as a way to talk about the coordinated ways that colonies of social insects like bees and ants behave has come to be applied also to the collective thoughts, ideas, and opinions of a group of people seeming to function as a single mind.

There's no telling what vocabulary the hive mind will be using in the future, but we'll be watching it every step of the way.