Pick-up artists. That group of men devoted to reducing the Ars Amatoria into a wikiHow pictorial.

If you're unfamiliar, PUAs (they're often referred to by acronym) are men who gather online to post self-tanner reviews and to swap strategies for approaching attractive women. They've developed their own argot to aid them in their conquests. One PUA term of art, however, seems to be spreading beyond the “seduction community”: negging. 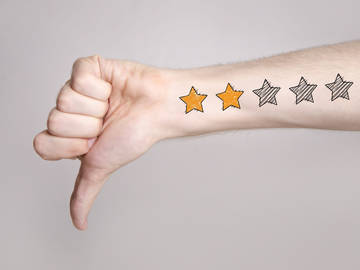 "Two stars. Did not enjoy negging"

Negging (the usual form is the gerund negging, but it is also used in the form neg as a simple verb and occasionally as a noun) involves throwing a mild insult at a woman. The intention is to surprise her enough for her to take an interest in the confident and judgmental man issuing the insult (rather than assuming he is a creep):

The idea is so widespread that some people are even making money off it, selling self-help books and teaching men how to pick up women by insulting them—a practice known as "negging."
— Viren Swami, Sunday World (South Africa), 23 April 2017

An article in the New York Times detailed the technique with a description of one such enterprising seduction guru, a man who calls himself “Mystery”:

The "neg," for example, is his invention. Neither a compliment nor an insult, a neg holds two purposes: to momentarily lower a woman's self-esteem and to suggest an intriguing disinterest. ("Nice nails. Are they real? No? Oh, they look nice anyway.") Mystery cautions online, however, that negging is only for exceptionally beautiful women used to a steady stream of compliments.
— Neil Strauss, The New York Times, 25 January 2004

Negging presumably derives from negative or negation, and early uses show its meaning to be largely synonymous with the term reject (or, in gerund form, rejection):

For example, I got negged by Cornell's Solid State Devices dept. and got in everywhere else; and a friend got burned by Carnegie-Mellon's Robotics group, and his stats aren't too shabby.
— net.college newsgroup, 19 December 1985

Don't get me wrong, but your blanket negging of all religion feels just as dogmatic as any religious view I've come across.
— alt.fan.tom-robbins, 15 April 1996

The more recent pick-up artist’s meaning is essentially "to mildly insult someone in order to elicit their sexual or romantic interest":

What works on women, he says in the book, is a series of moves and dialogue to convey absolutely no interest at all. One way to do this is to initiate a conversation by “negging” a woman, which is hiding an insult within a compliment. One example in the book: “I loved Bugs Bunny cartoons when I was a kid. You have the cutest little Bugs Bunny overbite.”
— Jon Ibrahim, The Chicago Tribune, 3 October 2005

In their own defense, PUAs who neg claim that all they're really trying to do is differentiate themselves from the legions of men who use and abuse compliments.
— Hugo Schwyzer, jezebel.com, 31 May 2011

Along with the pick-up artist meaning, a simpler meaning of "to insult" or "to make negative comments about” is also seeing some use:

But, as we found out on last night's Carpool Karaoke with James Corden, singing along to Madonna sans Madonna means that you don't have to deal with Madonna flouting seatbelt laws and negging on your shirt.
— Jennifer Campbell, thestranger.com, 8 December 2016

And finally, perhaps a sign of the term’s broad acceptance, neg is starting to see some metaphorical use:

Insulting our city is a pretty counterintuitive way of working for our love—kind of like a pickup artist “negging” a girl at a bar.
— Maura Judkis, The Washington Post, 1 December 2016

Here's to Mystery and all the other pick-up artists who have given so many free Friday and Saturday nights to add such a handy term into our lexicon. English thanks you, even though you look goofy in that fuzzy hat.