As fashion accessories go, neckties are about as functional as the wigs worn by aristocratic men in old European portraits. As it turns out, both traditions trace back to the reign of Louis XIII of France, a period when swashbuckling capes, wide-brimmed hats, and ruffled shirts were in fashion (this is the time of the Three Musketeers and Cyrano de Bergerac, after all). Louis XIII set the trend for wearing wigs that initially resembled the natural long hair styles of the time. 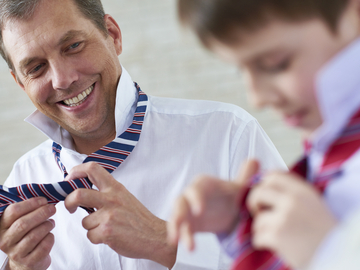 People have been wearing neckties since the reign of Louis XIII of France.

Origin of the Tie: Cravat

He also liked the short scarves worn by mercenary Croat soldiers fighting with the French during the Thirty Years’ War; French courtiers adopted the scarf and called it a cravate—the French word for “Croat.” This word crossed the channel quickly, and by the 1650s, Charles II of England was depicted wearing a knotted scarf around his neck. In the words of 19th-century historian Thomas Buckle:

In the latter end of the reign of Charles II, the cravat, or neckcloth, was introduced, and being worn by him and by the courtiers, it became exceedingly fashionable.

The wider cravats slimmed down over time; by the end of the 1600s, the French, again inspired by military fashion, referred to the slimmer variety with long hanging ends as a cravate à la Steinkirke, named for the location of the victory over English, Dutch, and German forces in Belgium in 1692. Voltaire recounts that the French were attacked by surprise in the early morning hours and unable to fully dress (and knot their cravats) when fighting began, and the resulting vogue in neckwear became known as the steinkirk. Further military influence came with stocks, originally leather neckbands worn for protection in battle and to encourage good posture in soldiers, but elegant civilian versions were made of silk.

The development of ever-more elaborate knots and fads of fashion resulted in the publication in 1818 of Neckclothitania, a signal achievement of Romantic-era snark. It gives elaborate descriptions of the many varieties of neckwear in deep detail:

The Ballroom Tie when well put on is quite delicious–It unites the qualities of the Mathematical and Irish, having two collateral dents and two horizontal ones, the one above as in the former, the other below as in the latter. It has no knot but is fastened as the Napoleon. This should never of course be made with colours but with the purest and most brilliant blanc d’innocence virginale.

The preciousness of extravagant men’s fashion of this period was personified by Beau Brummell, and the word dandyism entered the language in 1819.

This focus on the style of knots gradually brought the term necktie and its shorter form tie to prominence. Necktie dates to the 1830s, and tie became increasingly common in the second half of the 1800s.

The rising middle class brought with it a simplification and standardization of men’s neckwear in the 1890s, as well as the terms bow tie and four-in-hand tie, which is the original name for the long tie most commonly worn today. It is uncertain whether this name comes from the resemblance of this kind of tie to the reins of a four-in-hand horse carriage, the ties typically worn by the carriage drivers, or the name of a fashionable gentlemen’s club in London.

The tradition of diagonal stripes in regimental or college colors on ties—proof that neckwear continued to be influenced by the military—began in Britain. These ties are known as repp ties, from the name of fabric with prominent rounded crosswise ribs used to make them. Because the colors identify current or former members of specific units or schools, when Brooks Brothers introduced striped ties in the U.S. in the early 1900s, the stripes were set in the opposite direction; to this day, British ties have stripes that run from the left down to the right (some say “from heart to sword”) and American ties have stripes that descend from right to left.

The wearing of wigs died out over time—which brings us back to the French kings. Wigs were so closely associated with nobility that they fell from fashion after the French Revolution and the execution of the great-great-great-great grandson of Louis XIII: a new and more ideologically egalitarian era had arrived. (It’s no coincidence that Washington, Jefferson, and Franklin always went wigless.)

Needless to say, the wearing of neckties continues to this day.

They began as part of military uniforms and endure as the uniform of professionals: part fashion, part convention.

And, usually, all silk.