The Olympics of Language

The Trials of a National Spelling Bee Competitor

The National Spelling Bee is the Olympics of language. It has the drama of a sports event (and will be broadcast on ESPN tonight), but the spellers support and root for each other, because this is a competition against a common foe: the dictionary – what Joe Heim describes in the Washington Post as "an unyielding opponent." The official dictionary of the Bee is Webster's Third New International Dictionary, Unabridged, a book with over 470,000 entries. (Webster's Third is currently being updated online at Merriam-Webster Unabridged – also the name of its new incarnation.) 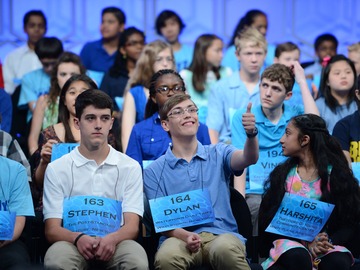 "We celebrate the accomplishments of these young spellers not just for mastering the superficial exterior of words, but for demonstrating a deep understanding of our culture as expressed through language."

English is famously difficult to spell. We have silent letters (psychology, knack), double letters (approximate, chlorophyll), and foreign borrowings (champagne, stromuhr, appoggiatura) – all of which would seem to contradict phonetic logic. Perhaps the trickiest part of spelling is the humble unstressed vowel sound called the schwa, the first and last sound of the word "America." Dictionaries and linguists use an upside-down e to represent the schwa: \ə\. The schwa sound can be spelled with any vowel letter in English: a in about; e in taken; i in pencil; o in eloquent; u in supply; y in physician. Sometimes we hear a schwa where there are no visible vowels at all, as in the second syllable of rhythm. The Olympic-level spellers at the National Spelling Bee rarely have to guess at a word's spelling in early rounds of competition, but by the difficult final rounds, choosing the correct vowel becomes a challenge.

Probably the most important clue for any word is its own history, or etymology. Knowing that a word derives from Greek, for example, indicates that the sound of s can be spelled ps- or the sound of f can be spelled ph-. The commonly misspelled word sacrilegious becomes easier to spell if you know that it does not derive from religiosus, the Latin root of religious, but rather from the Latin sacr-, meaning "sacred," and legere, meaning "to steal" – the e and i are swapped. The English language is a palimpsest of human history, with layers of Old English, Latin, medieval French, and nearly every language it has come into contact with. It has been said that spelling is the clothing of words because it's the part that we see. But we can also view spelling as the bones of words, revealing their structure, constituent parts, origin, and function across the centuries. We celebrate the accomplishments of these young spellers not just for mastering the superficial exterior of words, but for demonstrating a deep understanding of our culture as expressed through language.

This year, some 11 million students competed in school and regional spelling bees in order to qualify for the National Bee. 283 spellers compete this week in Washington, DC.