The table set aside for the younger generation at family gatherings has many variants throughout writing. Typically it's known as the kids' table, implying the table is for all of the kids, but it's also sometimes seen as kid's table, which isn't exactly grammatically correct. Alternately, synonyms for kid can be used attributively to alter the purpose of the table, as in kid table, child table, children table, or even kiddie (or kiddo) table.

At family gatherings, generations often congregate wherever the appetizers and beverages are located, or where there is a comfy couch and a television, and talk about pastimes and current and future happenings. Grandparents will share stories with their grandchildren about their mom or dad, like how they caught their mom literally mixing a brownie mix by hand (instead of a spoon) because those were the instructions on the box or how dad failed his driving test three times; aunts and uncles will catch up with nieces and nephews on what they are doing or will be doing with their lives; younger cousins will sit together, get the house Wi-Fi code, and start texting, playing games, and checking Instagram. Then the words "Everything's ready—come and eat" are heard, and the generational mingling is, more often than not, put on hold.

The adults seat themselves at the "adult table"; the non-adults (children and, perhaps, young adults who have not graduated to the adult table yet) find their spot at another table, which has various names. The naming of the table is a family affair—in other words, different families call it different things. This gives us the opportunity to talk about possessive and attributive use of kid, kiddie, kiddy, kiddo, kidlet, child, and children when used with table—as well as to engage in some table talk about their origins. 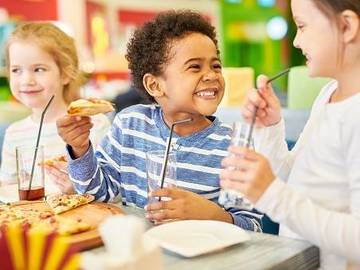 The adult table is boring anyway.

The Origin of 'Kid'

Kid arrives in the English language in the early 13th century as a word for a young goat and is of Scandinavian parentage. It eventually finds its place in slang as a word for a young person. The sense likely comes about by association, but we're not exactly sure if the goat's youth or bleating (or both) influenced it. Nevertheless, by the 19th century, it starts becoming a ubiquitous word in that meaning and, in time, is applied possessively or attributively to designate a table for the young people partaking in a multi-generational meal.

Kids' table, with the apostrophe after the s, is the correct possessive form since it indicates plural possession; however, kid's table is sometimes used, which grammatically doesn't make much sense because it suggests that the table is for one child (we feel for that kid). The designation kid table uses kid as an attributive noun, not as an adjective. The adjective means "younger," as in "kid sister/brother," and although the table has younger eaters, it itself isn't younger. Being attributive means the noun kid is a noun that is modifying the noun it precedes—in other words, it is a noun used like an adjective.

The holiday didn't really start until we were banished to the kids' table, one room away. We were out of sight and out of mind, giving us ample opportunity to be silly, tell tall tales and build elaborate sculptures with our mashed potatoes. Unlike the adult table, where all of the participants were stuck in their chairs to make small talk, for what seemed like hours, we were free to sneak away, turkey half-eaten and explore the basement, where all manner of treasures were buried.
— Brian Reid, The Washington Post, 25 Nov. 2009

If you dare to cut your dessert in anything less than perfectly symmetrical slices, you may ruin your entire party and upset your guests to the point of complete despair. … This is serious. Some snarky teenager sitting at the kid's table will take a photo of your oddly shape cake slice and post it on Twitter, and then you'll become the laughing stock of family dinners for the next three years. It's just not worth the risk.
— Elisabeth Sherman, Food & Wine, 20 Dec. 2017

Kiddie (or kiddy) is a diminutive of kid formed by the suffix -ie (or -y), and it also originally designated the ruminant mammal before becoming the name for a young person. (A diminutive word denotes something small, cute, or dear—for example, birdie, deary, and Tommy.) The word is used attributively when describing the table at which kids gather to eat and/or make their food sculptures.

No one at the kiddie table cares that the tablecloth, napkins and sometimes the plates are disposable. There are no candles, gravy boats or wine glasses to knock over.
— The Atlanta Journal-Constitution, 10 Nov. 2012

We're starting to feel right at home; like the first Thanksgiving when you finally move from the kiddy table to the adult buffet and get to hear conversations about the best movie ever made (The Bridge on the River Kwai), young people today, and how Home Depot royally screwed up a paint order.
— Laura Hahnefeld, The Phoenix New Times, 13 Jan. 2010

There is also the informal kiddo (the suffix -o means "one that is, has the qualities of, or is associated with," e.g., cheapo or wino) as well as the diminutive kidlet. Both are used as names for a young person (but not a goat). The suffix -let is derived from French -elet and -et. Common English words including the suffix are tablet and booklet. The colloquial kiddo and kidlet are not often found in company with table, but they do pair up from time to time.

Nowadays, Tony, Alex, Ari and I plan a trip back home to Cleveland (I was born there) to have Thanksgiving with the relatives and relive some of my childhood memories so I can share them with my kids. From the moment we arrive, there is hugging, kissing and pinching of the cheeks and storytelling. We go to take our "places at the table," my kids at their appointed place and Tony and I at ours. I look down the very long table and can't get over how it seemed like yesterday I was at the "kidlet" table and how the time has literally flown by. I look to the left of me and see a sea of people in order of birth, and I'm filled with emotion as I take great pride in our family. Then I turn to the right and totally freak out! I realize that Tony and I are in the grandparents' section of the table and literally two people away from death!
— Cristina Ferrare, Oprah.com, 11 Nov. 2009

Lastly, there is child and its plural children. The word child was born in Old English and has had its plural formed in many ways over the years before English speakers settled on children. In Old English, for instance, child was spelled cild and its plural was the same as the singular form (like Modern English sheep and deer). Another Old English plural was formed by adding the suffix -ru, cildru. There was also the plural suffix -an, which survived in Middle English as -en, giving Modern English children, as well as plurals like oxen and brethren.

Children's table is an acceptable designation for a table of young people ravenously eating dessert next to their untouched or half-eaten dinner plates. Occasionally, child table is used, and that's fine: child, like kid, has attributive use. As for child's table—again, we feel for the child as we do for the kid at the kid's table.

When I was growing up, at all our big family meals, like Thanksgiving and Christmas, we had an adult table and a kid table. I looked forward to the day I could move up from the child table to the adult one.
— Kristopher Norris, Pilgrim Practices, 2012

The host sets up a "child's table" because there isn't room for everybody at the "big table." (FYI, some of us were seated at the child's table until we married.)
— Valerie Fraser Luesse, Southern Living, 11 Sept. 2019

As you can see, that wobbly card table dragged out from storage for special occasions has quite a few names. We can't argue against using the nouns kid, kiddie, and child attributively, or using the plural possessives kids' and children's, but the singular possessives go against the rules of grammar. As for kiddo(s) table, kidlet table and children table: kiddo is a very informal colloquialism (and somewhat dated) but can be used attributively or possessively, and, quite simply, kidlet is a rarely used word and might raise some eyebrows at the adult table; children's is more commonly placed at the head of table. But it's your house so call it what you will, and if your guests don't like it, no dessert for them.