No, you can collide with a parked car 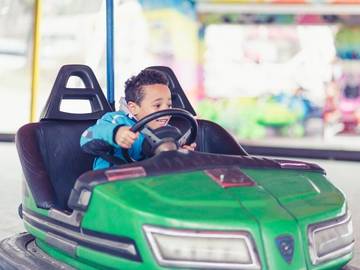 One might also collide with that one bumper car that just spins in circles.

The English language is always changing, existing in a perpetual state of flux (for which we should be glad, for it means that the language is alive and well). The changes are often most obvious when a new word is encountered, or when a new sense is added to an existing word. However, another form of change comes from rules or guidelines falling away. An example of this may be found with collide.

For much of the 20th century it was common to find usage and journalism guides stating that in order for two things to collide they must both be in motion. This proscription has diminished in recent years, due to the fact that uncountable millions of people apparently use collide as though one can, in fact, collide with a stone wall. Nevertheless, there are still stalwart believers in the necessity of dual motion with collide (and collision).

collide, collision. Only two objects in motion can collide.
— The New York Times Manual of Style and Usage, 2015

As examples both of the fact that not all writers follow the stylebook of the publication that they write for and the manner in which collide is frequently used we present the following citations:

His bike collided with a stone wall, he popped up like a jack-in-the-box and then disappeared over the side.
— Michael Powell, The New York Times, 23 Jul. 2019

And a fair number of spacecraft collided with the moon by accident.
— Jonathan Fetter-Vorm, The New York Times, 19 Jul. 2019

The birds collided with the live electrical wires and fell to the ground.
— David Streitfeld, The New York Times, 9 Mar. 2019

Another train, traveling westbound, then crashed into the vehicle and pushed it down the tracks before the front two cars of the train derailed and collided with the concrete platform.
— Azi Paybarah, The New York Times, 27 Feb. 2019

Collide has been in use in English since the first half of the 17th century, initially in transitive use (“to strike against”), a sense that is now obsolete. The intransitive sense (“to come together with solid or direct impact”) began being used near the beginning of the 18th century.

The first, I supposed, writ for invitation to imitate, the second to stand like an Index anchoralis, or seamarke, lest posterity should collide upon the same rocke.
— Robert Johnson (trans. by T. M.), The historie of Scotland, 1646

Most of the usage guides today have stopped worrying about the only-one-body-in-motion, or didn’t find it objectionable to begin with. The online AP Stylebook removed their entry (“Two objects must be in motion before they can collide”) early in 2018, and the most recent edition of Fowler’s Dictionary of Modern English Usage (2015) says “There is no basis for such a belief.” Usage rules often take decades (or even centuries) to fully die, so there is always a chance that you may find yourself corrected by someone for saying that you collided with a parked car. Worry not, for this use is entirely standard and widely found in all levels of writing.