How 'Muckraker' Got the Dirt

It once had nothing to do with muck or rakes.

What exactly is a muckraker, where does the word come from, and should you be insulted if someone refers to you as such? As with so many multi-part questions, the answers are "it depends," "we have a good idea," and "it depends." 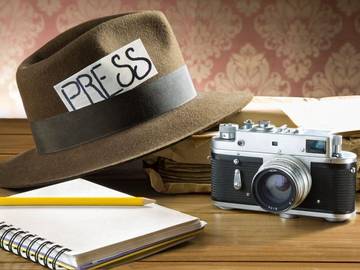 We're going on the record.

Once upon a time, in the early 17th century, muckraker was synonymous with dryfist, flayflint, and nipcheese (all of which are just fancy ways of saying miser). This sense of the word saw little use; so little, in fact, that muckraker got sleepy and decided to take a very long nap. Writers would occasionally use the word (Arthur Dent did so memorably in his 1703 work The Plain Man's Path-way to Heaven: "The gripple muck-rakers had as leeve part with their blood, as their goods"), but it was for the most part obsolete.

Then in the 19th century muckraker had a comeback. The renewed sense is thought to have been influenced by John Bunyan's late 17th century religious allegory, The Pilgrim's Progress, in which a character with a muckrake ("a rake for dung, or muck") is perhaps metaphorically preoccupied with muck.

Thou hast said the right, said he, and his Muck-rake doth show his Carnal mind.
— John Bunyan, The Pilgrim's Progress (2nd part), 1684

Yet see him! Like Bunyan's muck raker, he looks down on the earth, and is searching and digging for worldly treasures.
— New York Evangelist, 23 Jan. 1845

Mr. Morgan does not, we imagine, profess or feel much popular sympathy,—at least if we may judge from the unfair though powerful attack on the penny press as the gigantic muckraker, who rakes and rakes without ever lifting his head for the crown Truth offers him.
— The Spectator (London, Eng.), 18 Jan. 1868

...and in the promise Lord Palmerston pledged himself to show how utterly groundless were the charges brought against Lord Stratford de Redcliffe by the Times and other muck-rakers, who trade upon "the envy, hatred, malice, and uncharitableness," of the mass of ignorant and ill-disposed people.
— The Standard (London, Eng.), 1 Feb. 1856

These uses of the word were all decidedly pejorative, and it is unlikely that anyone would call themselves a "proud muckraker." But the meaning of muckraker (and of muckrake and muckraking) was beginning to shift, away from its Bunyanesque roots, and at the end of the 19th century began to take on the sense of "uncovering corruption."

The word was given a considerable boost in 1906, after Theodore Roosevelt gave a speech in which he waxed critical of journalists who exposed corruption.

The men with the muck-rakes are often indispensable to the well-being of society; but only if they know when to stop raking the muck, and to look upward to the celestial crown of worthy endeavor.
— T. Roosevelt, (quoted) The Quad-City Times (Davenport, IA), 15 Apr. 1906

Immediately after Roosevelt's speech, muckraker took on the sense of "one who searches out and publicly exposes real or apparent misconduct of a prominent individual or business." In modern parlance the word is of rather fluid applicability and meaning, and may, depending on the context in which it is employed, carry either positive or negative connotation. If someone calls you a muckraker and you are unclear as to whether it is intended as a compliment we recommend you examine your rake to see what kind of muck is on it. If you're proud of it then you may wear muckraker with pride, and if not, well, you can also come back with nipcheese.