Update: This meaning was added in January 2020.

On February 1, the White House announced that it was hoping to spend $1 billion on a cancer moonshot. The same day, Alphabet (the company formerly known as Google) released rare financial information on its most successful moonshots. Neither the government nor Alphabet are heading to the moon, however. 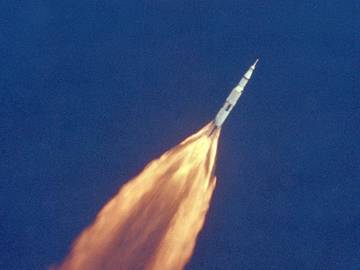 While 'moonshot' originally meant "long shot," it's increasingly being used to describe a monumental effort and a lofty goal—in other words, a "giant leap."

This use of moonshot refers to a project or venture that is intended to have deep-reaching or outstanding results after one heavy, consistent, and usually quick push. The $1 billion promised by the White House is intended to find a cure for cancer, and one of the business ventures that Alphabet is willing to talk about is Nest, a home automation company the produces wireless, programmable, and self-learning thermostats and smoke detectors (among other things).

You may be more familiar with the literal moon shot (which, in most cases, is styled as two words and not one), a spacecraft mission to the moon. In the early days of space exploration, a trip to the moon was considered the pinnacle of technological advancement, as is evidenced by our earliest citation for this particular use of moon shot:

The real result of all the work which would have to go into the moon shot...would be the knowledge of how to build and operate rockets of such size. (Rotarian, April 1949)

The size, scope, and quick-fire nature of a literal moon shot gave rise to a sports meaning that is very much in use today: a ball hit or thrown in a high trajectory. It also gave rise to the new meaning that we're tracking that refers to a monumental effort and a lofty goal.

For a moon shot, Zinnia would be the right one. (Washington Post, 1936)

Melodrama, confusion and sensationally long odds were thrown into the Kentucky Derby picture today when a 143-1 moon shot named Built for Pleasure won the Fountain of Youth Stakes by a neck over Unbridled's Song, widely ranked as the best 3-year-old in the country. (Joseph Durso, The New York Times, 25 Feb. 1996)

Moon shot is less likely to mean "long shot" today, in part because we've proven that a literal moon shot is possible. Now, politicians who announce a moonshot are understood to intend it in the new sense of the word, as an ambitious venture which is intended to show significant results. In other words, people who use the word this way are likely hoping you'll think of the literal moon shot—not the term that comes from horse racing.