Where Does the Word 'Mayday' Come From?

The amazing origin of a famous distress call

May Day: a day we in the northern hemisphere have historically reserved for fun springtime activities, like the maypole and picnics; a day when we can see summer and sprinklers and Popsicles right around the corner; a day that can't help but bring to mind...airplane pilots calling for help? 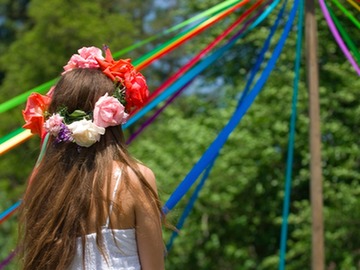 'Mayday' is an internationally recognized distress signal. 'May Day' is a spring holiday and, in some places, a celebration of working people. The terms sound similar, but they have different origins. They are not spelled the same way.

Mayday is an internationally recognized radio word to signal distress. It's used mostly by aircraft and boats, and most of us are happily only familiar with it through TV and fiction. It appears as both an interjection ("Mayday! Mayday!") and to modify a noun ("a mayday signal"). The May Day that refers to the first of May has been in English for a very long time—back to the 1200s, in fact—but it’s not what inspired the call for help.

Mayday first came into English in 1923. There was a lot of air traffic between England and France in those days, and evidently there were enough international problems over the English Channel that both parties wanted to find a good distress signal that everyone would understand. But surely there already was a distress signal that everyone understood? There was—S.O.S.—but there were some problems with it:

Owing to the difficulty of distinguishing the letter "S" by telephone, the international distress signal "S.O.S." will give place to the words "May-day", the phonetic equivalent of "M'aidez", the French for "Help me."
—"New Air Distress Signal," The Times [London], 2 Feb. 1923

SOS was most commonly used in telegraphic communications, where the unmistakable pattern of SOS in Morse code (...---...) was easy to remember and easy to decipher. SOS was used predominantly by ships that were in distress. Aircraft, by comparison, used radio and not telegraph as their primary means of communication, and when in distress, a pilot wouldn't have time to clarify to anyone listening that they meant S as in "Sam" and not F as in "Frank." A short, easily understood word that couldn’t be mistaken for something else was necessary.

The Times article goes on to say that the new distress call was tested by an RAF "flying-boat" whose engines had failed over the Channel. They gave the signal three times and said their engines had failed, and radio operators in Croydon and Lympne received and transferred the signal to Dover, which sent out help. Supposedly, mayday was coined by Frederick Stanley Mockford, a senior radio officer in Croydon, but we’ve been unable to substantiate that claim.

The call spread well beyond the Channel; the new distress signal's use was reported as far away as Singapore. In 1927, the United States formally adopted it as an official radiotelegraph distress signal, helpfully explaining in Article 19 of their resolution that mayday corresponds "to the French pronunciation of the expression m'aider."

MORE TO EXPLORE: Under 'Duress' or Under 'Stress'?](https://www.merriam-webster.com/words-at-play/when-to-use-duress)