And how on earth do you pronounce it? Mary Norris explains.

Mary Norris began working at The New Yorker in 1978 and spent more than three decades as a copy editor, where she worked with celebrated writers Philip Roth, Pauline Kael, and George Saunders. She is the author of Between You & Me: Confessions of a Comma Queen. Among other things, her book demystifies one of the most puzzling marks a reader is likely to encounter: the diaeresis.

There is one other way to keep the “cow” out of “co-workers”: where two vowels rub up against each other, a diaeresis may be used instead of a hyphen. Often mistakenly called an umlaut, a diaeresis (pronounced “die heiresses”; it’s from the Greek for “divide,” and is devilishly hard to spell) consists of two dots carefully centered over the second vowel in such words as “naïve” and “reëlection.” An umlaut is a German thing that alters the pronunciation of a vowel (Brünnhilde) and often changes the meaning of a word: schon (adv.), already; schön (adj.), beautiful. In German, if an umlaut appears in a combination of two vowels, it will go over the first vowel, and it indicates something important: a plural, say. A diaeresis always goes over the second vowel, and it means that the vowel is leading off a separate syllable. 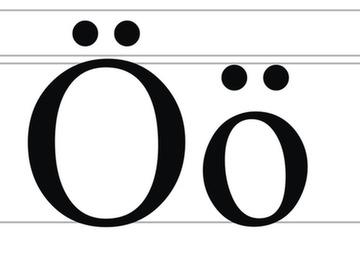 A diaeresis is a mark placed over a vowel to indicate that the vowel is pronounced in a separate syllable—as in 'naïve' or 'Brontë'.

Most of the English-speaking world finds the diaeresis inessential. The New Yorker may be the only publication in America that uses it regularly. It’s actually a lot of trouble, these days, to get the diaeresis to stick over the vowel. The autocorrect whisks it off, and you have to go back, highlight the letter, hold down the option key while pressing the u, and then retype the appropriate letter. The question is: Why bother? Especially since the diaeresis is the single thing that readers of the letter-writing variety complain about most.

Basically, we have three options for these kinds of words: “cooperate,” “co-operate,” and “coöperate.” Back when the magazine was just developing its style, someone decided that the first could be misread and the second was ridiculous, and so adopted the third as the most elegant solution with the broadest application. By the thirties, when Mr. Hyphen was considering these things, the diaeresis was already almost obsolete, and he was through with it. He was for letting people figure things out for themselves. The fact is that, absent the two dots, most people would not trip over the “coop” in “cooperate” or the “reel” in “reelect,” though they might pronounce the “zoo” in “zoological” (and we don’t use the diaeresis for that).

Not everyone at The New Yorker is devoted to the diaeresis. Some have wondered why it’s still hanging around. Style does change sometimes. For instance, back in the eighties, the editors decided to modernize by moving the semicolon outside of the closing quotation mark. A notice went up on the bulletin board that began, “Adjust your reflexes.”

Lu Burke used to pester the style editor, Hobie Weekes, who had been at the magazine since 1928, to get rid of the diaeresis. Like Mr. Hyphen, Lu was a modern independent-minded reader, and she didn’t need to have her vowels micromanaged. Once, in the elevator, Weekes seemed to be weakening. He told her he was on the verge of changing that style and would be sending out a memo soon. And then he died.

This was in 1978. No one has had the nerve to raise the subject since.

Excerpted from Between You & Me: Confessions of a Comma Queen by Mary Norris. Copyright © 2015 by Mary Norris. With permission of the publisher, W. W. Norton & Company, Inc. All rights reserved. To see more of our favorite books on language, click here.