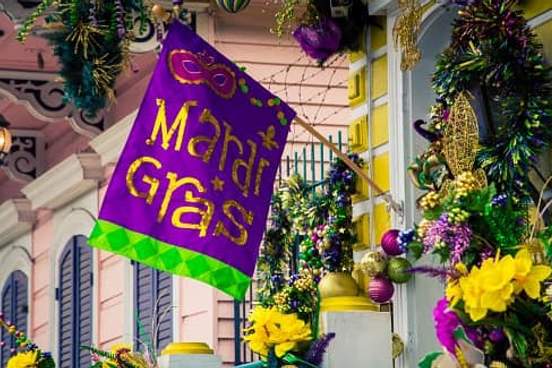 Mardi Gras is French for "Fat Tuesday." In the United States, it is best known as the New Orleans celebration of carnival that leads up to Ash Wednesday, the beginning of Lent and fasting. Incidentally, carnival is from Italian carnevale, meaning literally "removal of meat." Mardi Gras is also known as Shrove Tuesday from the practice of going to confession during the Lenten season; shrove is from shrive, an archaic verb meaning "to confess one's sins especially to a priest." 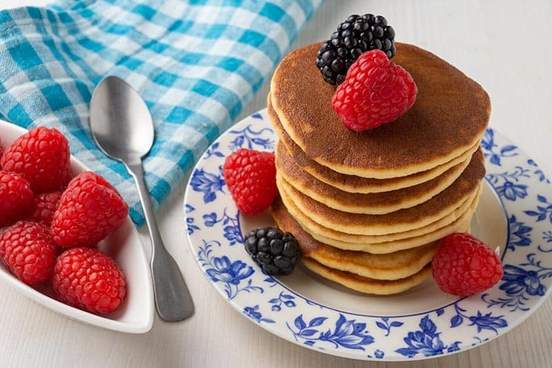 In the past, it was customary for households to consume as much of the foods that would be forbidden during Lent, such as meat, eggs, and dairy products, as Ash Wednesday approached. A popular food that was made for consumption was the pancake, which led to the nickname Pancake Day for Mardi Gras.

A pancake is a flat, round cake that is made by cooking thin batter in a frying pan or on a griddle. Other names for the food are flapjack, slapjack, griddle cake, and hotcake, depending on where you might be ordering a stack. There is also the French crêpe and its Anglicized spelling variant crepe, which is the name for a small, very thin pancake that is used to make a variety of food items but especially those on the breakfast and dessert menus. 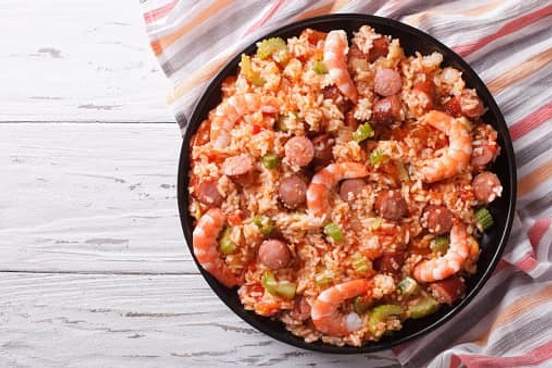 Gumbo is a legendary Southern soup that is thickened with okra pods or filé (the powdered leaves of sassafras). It is a mélange of meats, seafood, and usually vegetables. Gumbo is also a word for the tall okra plant itself having the mucilaginous, green pods. The word gumbo is adapted from American French gombo, which is of Bantu origin and akin to Umbundu ochinggômbo, a long word for "okra."

Jambalaya is a creole food that has similar ingredients. It is a gallimaufry of such meats as ham, sausage, chicken, shrimp, or oysters balanced with vegetables. The key difference between gumbo and jambalaya is rice. If rice is served separately, it's gumbo; if mixed in the dish, it's jambalaya.

King Cake is a quintessential confection that is as much a cornerstone of Mardi Gras celebrations as is gumbo and jambalaya.
— Chula King, The Tallahassee (Florida) Democrat, 3 Feb. 2021 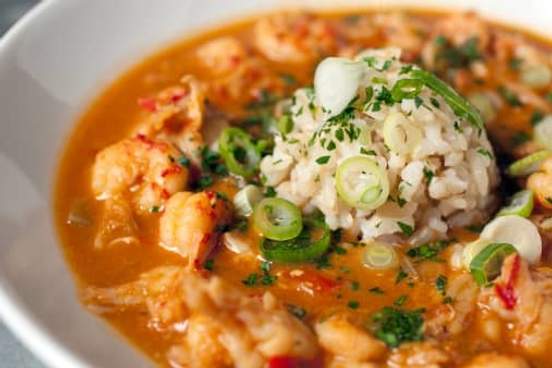 Crayfish (or crawfish) is the name used for small crustaceans that look like little lobsters without the big front claws. Since crustaceans live in the water, the -fish of crayfish is logical; however, it has nothing to do with the word’s origin. Crayfish is an altered form of the Middle English word crevis, which derives from the Anglo-French word creveis, which had the stress on the second syllable. This syllable was heard and repeated as -fish frequently enough to alter the word toward the more English-sounding name of the aquatic animal. This transformation of the word so as to make it better understood is known as folk etymology.

One entrée with crayfish to consider for a Mardi Gras lunch or dinner is an étouffée, a Cajun stew of shellfish (or chicken) served over rice. The base of the stew's name is French à l'étouffée, meaning "braised." 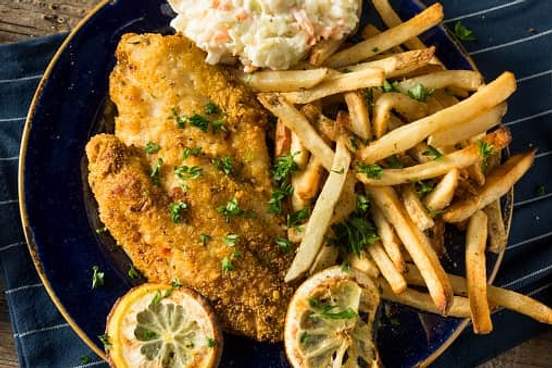 The catfish is a type of fish with a distinctive face having tactile barbels, which look like cat's whiskers, around its mouth. It is especially enjoyed in the South, where their meat is usually dredged in cornmeal and fried.

Catfish as a name for a person who set up a false personal profile on a social site is based on the title of Ariel Schulman's 2010 documentary of the same name. In it, an anecdote is given about how fishermen transporting live cod used to put catfish in with them on long-haul shipments to keep the desirable cod active and alert until arrival—the implication being that the catfish keeps the lives of others fresh and interesting. 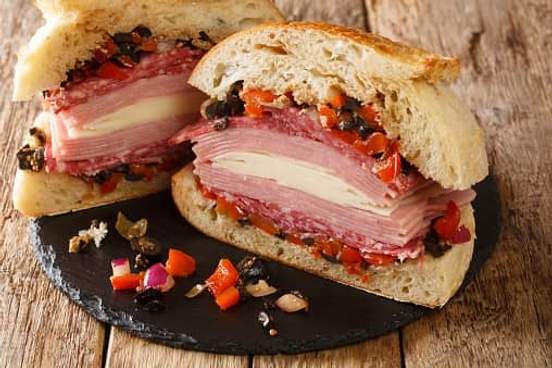 The muffuletta sandwich—filled with salami, ham, cheese, and olive salad—is a New Orleans classic and a staple of any Mardi Gras party. It is a creation of Italian immigrants who arrived in New Orleans in the late 1800s and early 1900s—hence, muffuletta is Italian. The name's origins likely include the Italian word muffoletta meaning "little muff," that word itself being a diminutive of muffola, "muff," from the French moufle, meaning "mitten."

Another satiating sandwich from New Orleans that was created in the early 1900s is the poor boy, which originally consisted of two slices of French bread holding meats, fried oysters, or whatever was on the menu at the time of ordering. It is more commonly known as the po'boy (a representation of southern U.S pronunciation). There are a few origin stories on the sandwich's name to chew on. We can only say with confidence that a common figure among them is the poor people during the Great Depression. 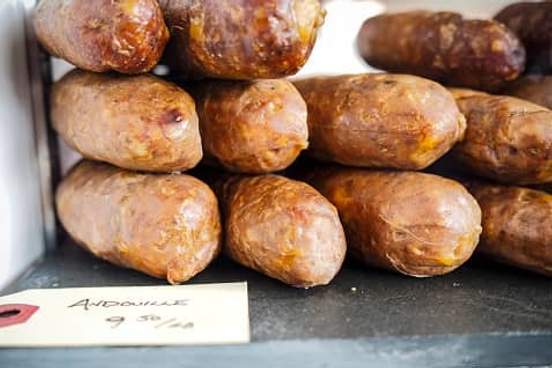 Andouille is the name for a highly spiced, smoked pork sausage that was borrowed from French in the beginning of the 17th century. It ultimately comes from the same Latin word that gave us induce, but by way of a Vulgar Latin word meaning "made by insertion." (We are talking sausage, after all.) This quote tells you just how much Louisianans love their andouille:

He said the company was getting ready to make 900 pounds of andouille sausage Wednesday—one of its staples as Mardi Gras approaches.
— Bryce Gray, The St. Louis (Missouri) Post-Dispatch, 27 Jan. 2021 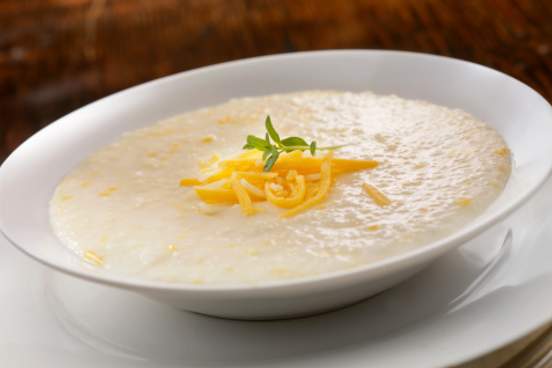 Grits is a plural noun that refers to a type of ground corn that is eaten especially in the southern United States. Its exact etymology is unclear, but it might have been influenced by grit, meaning "sand" or "gravel," as well as dialectal grit, meaning "coarse meal." Whereas the "sandy" grit goes back to Old English, the "breakfast" grits dates to the 16th century. Grits can be eaten as a meal itself or as a side to a Mardi Gras omelet. 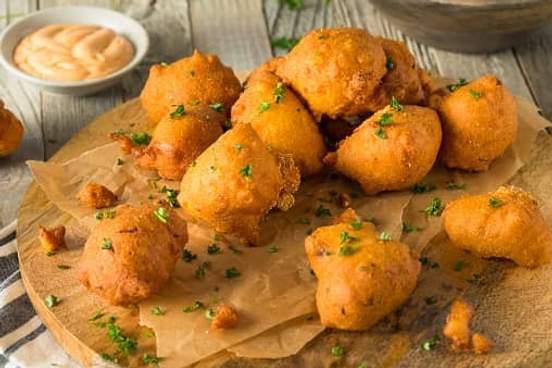 A hush puppy is a small, deep-fried ball of cornmeal dough, and a traditional foodstuff in the southern U.S. One possible, but completely unsupported, explanation for its name is that a simple version of the dough ball was first made by various people—such as Union soldiers during the Civil War, fishermen, or runaway slaves—to "hush" howling dogs. 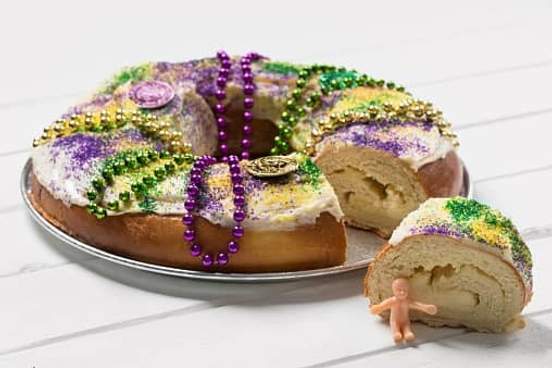 A popular Mardi Gras dessert is king cake, a sweet ring-shaped cake traditionally with a symbolic bean or figurine of the infant Jesus inside that is served from the Epiphany to Shrove Tuesday. What's the purpose of the choking hazard? This quote explains:

Of course, no one does king cake quite like New Orleans. It's decorated in the colors of Mardi Gras—purple (to represent justice), green (faith) and gold (power)—as chosen by one of the city's first Mardi Gras organizations, or krewes. A token or trinket—usually a plastic baby symbolizing the infant Jesus—is hidden inside. Whoever finds the baby may be crowned king or queen of the party; more important, that person is responsible for bringing the cake to the next gathering.
— Noelle Carter, The Los Angeles Times, 16 Feb. 2012 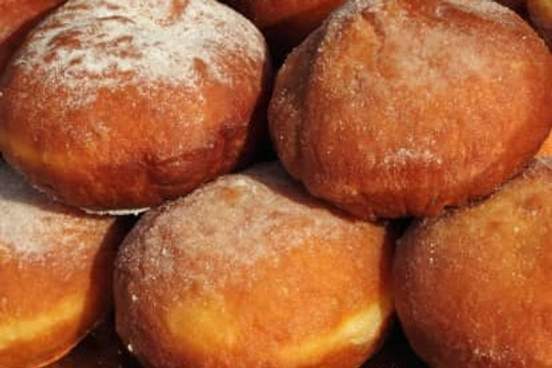 Fastnacht (also fasnacht) refers to both a festival held on Shrove Tuesday and to a doughnut made of yeast-leavened dough traditionally eaten on that day. The doughnut's name is a shortening of Pennsylvania German fasnachtkuche, which translates literally as "Shrove Tuesday cake." Fastnacht ultimately comes from Old High German fasta, meaning "fast," and naht, meaning "night." In some British dialects, Shrove Tuesday might be referred to as Fasten's E'en ("the eve of fasting") or Guttide. 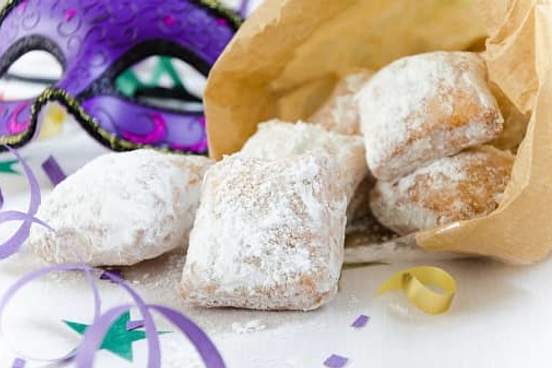 The original beignet was a fritter. Its name was kneaded from French words meaning "bump" or "bruise," which perfectly fits the small, lumpy fried mass of batter that is often filled with something sweet or savory. In the U.S., and especially in New Orleans, a beignet is something different: a light, puffy square doughnut usually sprinkled with powdered sugar and eaten whenever a craving for it strikes.

In South Jersey, the French-themed Woodbury Station Cafe in Woodbury also offers both the pillowy, powdered beignets homemade and chickory coffee, not just for Mardi Gras but daily for breakfast or lunch, along with crepes.
— Carol Comegno, The Courier-Post (Cherry Hill, New Jersey), 19 Feb. 2020 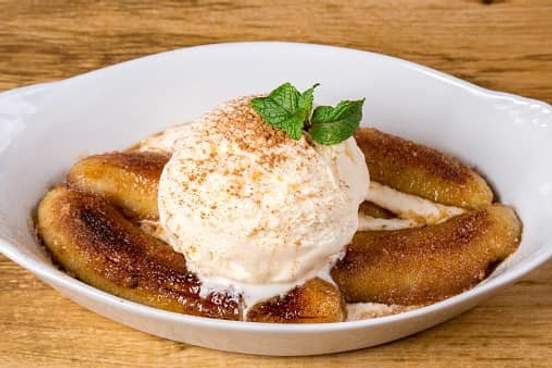 Bananas Foster is a yummy dessert of sliced bananas cooked with butter and brown sugar that is set aflame with a high-octane rum; it is served with ice cream to cool things down. Its namesake is a Richard Foster who was a friend of the New Orleans restaurateur Owen E. Brennan, at whose restaurant the dish was first created sometime mid-20th century. 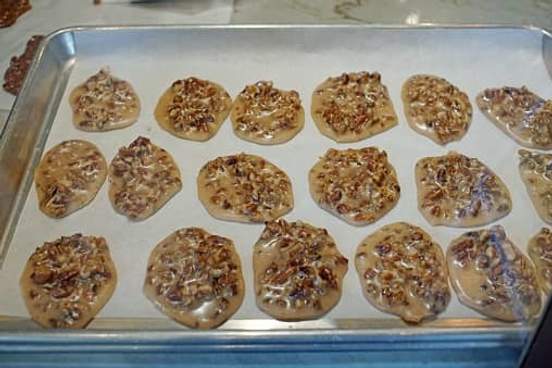 Praline (pronounced PRAH-leen or PRAY-leen) is the name of a confection of nuts and sugar. The original pralines, made in France in the 1600s, were almonds cooked in boiling sugar until brown and crisp and sometimes ground into a soft paste. When the French arrived in Louisiana, they used the local sugar cane and pecans and adjusted their recipe by adding salt and light cream to make their distinctive, creamy candy. The word praline comes from the name of 17th-century French Field Marshal Comte du Plessis-Praslin, because his cook made the first sugar-coated almonds.

Pecan also has a French heritage, the American French pacane. That word is from Illinois pakani.