How 'Mardi Gras' Got Its Name

You're about to fast for 40 days. Quick: eat everything in the house.

Mardi Gras is French for “Fat Tuesday.” It’s best known as the New Orleans celebration of carnival that leads up to Ash Wednesday, the beginning of Lent, the season of fasting and penitence during the 40 weekdays before Easter in the Catholic calendar. Since it's a holy season, devout people were supposed to go to confession, which led to calling the day Shrove Tuesday in Medieval England: shrove is from shrive, an archaic verb meaning “to confess one’s sins especially to a priest.”

Beads and floats are normally the first things people think of when someone mentions Mardi Gras. But a traditional Mardi Gras in Cajun country looks a little bit different.
— KATC News, 24 Feb. 2020

The Mississippi Corvette Club will be celebrating Mardi Gras today. The crew will be heading to numerous senior centers around the Mississippi Gulf Coast, to help let the good times roll with “mini Mardi Gras parades.”
— WXXV, 24 Feb. 2020 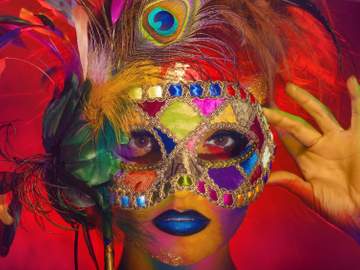 The two terms for the celebration take different perspectives: if 'carnival' is half empty, 'Mardi Gras' is half full (of pancakes, hopefully).

Given that Lent was a season of fasting, it makes sense that households would traditionally consume all remaining foods that would be forbidden during Lent, such as meat, eggs, and dairy products, as Ash Wednesday approached. Hence, Shrove Tuesday was also called Fat Tuesday, or Mardi Gras. French colonists introduced the term to the Americas in the 1600s, but the carnival tradition of merrymaking before Lent originated in Rome, probably as a compromise that the Christian Church made with the ancient annual pagan feast of Saturnalia. The original celebrations lasted longer, starting at Epiphany (January 6), but Renaissance popes restricted the fun to the last few days preceding Ash Wednesday. The carnival spread from Italy to the rest of Catholic Europe. In England, the custom of using up the eggs and fat before Lent led to another name: Pancake Day.

The practice of abstaining from meat during Lent is the ultimate origin for the word carnival, since it comes from the Latin words carne (“flesh”) and levare (“to remove,” “to take away”). The two terms we have for the celebration take different perspectives: half empty (carnival) and half full (Mardi Gras).

MORE: A Guide to Words You'll Hear Around Mardi Gras