It's everywhere these days and in various forms: mansplain (verb), mansplaining (gerund), mansplainy (adjective). We haven't seen adverbial use yet, but we're keeping our eyes open. The word's death knell has been sounded—it's so broadly applied that some say that any time a man opens his mouth he's accused of mansplaining—but mansplain is clearly not going to be dropping out of use any time soon. 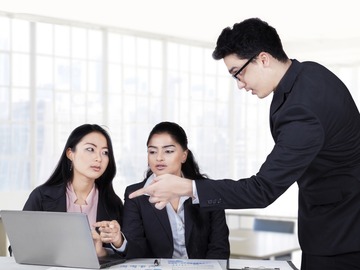 Mansplaining is, at its core, a very specific thing. It's what occurs when a man talks condescendingly to someone (especially a woman) about something he has incomplete knowledge of, with the mistaken assumption that he knows more about it than the person he's talking to does.

Although mansplain is most likely the coinage of a LiveJournal user (thanks, Know Your Meme), no discussion of mansplain is complete without mention of Rebecca Solnit's 2008 essay "Men Explain Things to Me," now also the title of her 2014 collection of essays. (The essay was published first at TomDispatch.com and later in the Los Angeles Times. It was reprinted in Guernica with a new introduction by Solnit in 2012.) Although Solnit didn't use the word mansplain in her essay, she described what might be the most mansplainiest of experiences anyone has ever had. Solnit and a friend were at a party where the host (a wealthy and imposing older man), upon learning that Solnit had recently published a book on 19th century photographer Eadweard Muybridge, proceeded to tell her all about a very important book on the same photographer that had just come out. The book, of course, was Solnit's, but the man had to be interrupted several times by Solnit's friend before he'd absorbed that knowledge and added it to the knowledge he'd absorbed from reading the New York Times review of the book.

The splain of mansplain isn't new. It's been used to mean "explain" in texts showing informal speech or—as when Ricky Ricardo admonished his beloved in I Love Lucy—in imperfect English for at least a century. Since the advent and consequent blossoming of mansplain, splain has been attached to other morphemes to create words modeled on mansplain. Mother Jones put the word leftsplaining into the headline of an article by none other than Rebecca Solnit (about how people on the political left should stop expounding on the failings of lefties to fellow lefties). A politician under the mistaken impression that potlucks are a unique Iowa tradition was accused of potluck-splaining when he tried to illuminate non-Iowans on how the communal meals work. But the playfulness in those coinages is often absent in other -splain words: a white person who has a lot to say about racism to people of color may be accused of whitesplaining; a straight person who has lots of advice for gay people about how to deal with bigotry against them may be called out for straight-splaining.

As these neologisms indicate, the element prefixing -splain can refer to either the person who does the splaining or to the topic being splained. The former is more common, and the latter is typically more playful.

More could be said on this topic, but lest we be accused of splain-splaining, we'll stop here. If you know something about it that we don't, leave us a message.