Can 'Majority' and 'Minority' Be Used with Noncount Nouns?

When we hear the word majority it’s often in the context of a sampling, such as a poll. You count the members of a group and if more than half share the same characteristic, then you can say the majority of the group share that characteristic.

The nation’s 8,300 signal and track switch repairers—the majority of whom are employed in California, Kentucky, Massachusetts, New York and Washington—install, inspect, test, maintain and repair electric gate crossings, signal equipment and track switches and, like most railroad workers, must have a high school diploma and on-the-job training to do so.
— Vicky Valet, Forbes.com, 25 June 2018 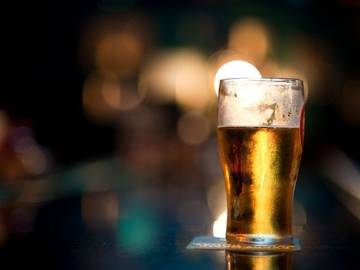 Noncount nouns, also called mass nouns, often refer to things that exist as a mass, already connote a plural, or exist only in the abstract.

It works the same with surveys. You ask a group of people a question, and if more than half of that group gives the same answer, then you can say the majority of that group are in agreement.

Hayes attributed the popularity of concealed carry in suburbia to perceptions of safety: He said the majority of small-town residents he has spoken to over the years tend to be far more fearful of crime than people living in the city…
— Tara Kadioglu, The Chicago Tribune, 26 Mar. 2015

These examples are relatively straightforward in that the noun being sampled is a countable plural. A count noun is one that can be expressed in units: 100 senators, nine justices, fourteen sandbags, a hundred million voters, two dozen doughnuts.

It's easy to pair near any count noun with majority or minority and have a clear idea what is being represented. At least fifty-one of 100 senators constitute a majority of those senators. So do five of nine justices. If thirteen or more of the two dozen doughnuts contain jelly, you can say that a majority of the doughnuts have jelly in them.

But a question arises when one attempts to use these words with a noun that is not countable because it is either a singular noun or noncount noun. Noncount nouns, also called mass nouns, do not get counted in units the same way that we count senators and doughnuts and sandbags. Noncount often refers to things that exist as a mass (mayonnaise, sand, garbage), that already connote a plural (applause, furniture), or that exist only in the abstract (petulance, smoothness, adoration). You wouldn't say you have four garbages or a hundred furnitures, so these nouns are considered noncount.

Traditionally, usage experts have insisted that majority (like minority) only works with count nouns. But we find the word used for all kinds of things being apportioned but that can’t exist as discrete units:

The majority of the rocket fuel is used in this acceleration phase. The high final velocity is required to ensure the released payload stays in orbit.
— Ingo Jahn, The Conversation (Australia), 25 June 2018

David Orr's On Poetry column about James Franco's "Directing Herbert White" drew a large and mostly acerbic online response. A majority of it was critical of the book and of Franco's ability and wide-ranging artistic ambitions; for giving him attention.
— letter, The New York Times Book Review, 3 Aug. 2014

It has long been known that much of our supply of neurochemicals—an estimated 50 percent of the dopamine, for example, and a vast majority of the serotonin—originate in the intestine, where these chemical signals regulate appetite, feelings of fullness and digestion.
— The New York Times Magazine, 28 June 2015

As these examples demonstrate, majority is used for all kinds of things that are not by nature countable, but that can be apportioned in their own way. It can be used with space, or things measured by area:

The current seawall problems may be limited to only certain sections where the barrier forms elbow corners that tend to absorb wave action, said deGeneres, who is also a civil engineer. It could be that the majority of the wall is stable enough to last for a number of years or that only sections of the wall may need replacement.
— Kim Chatelain, The New Orleans Times-Picayune, 30 Aug. 2017

The wire and post fence allows the much-loved Vietnamese pot-belly pig to enjoy the majority of the yard surrounding his family’s home and is sufficiently strong and tall to prevent him from breaking through.
— The Left Hand Valley Courier (Niwot, Colo.), 20 Apr. 2018

It can be used with time, or things measured by time:

“We expect him to be out there the majority of the time," [manager Dave] Roberts said. "Yasiel put in a lot of work this winter with his swing, his swing mechanics. And, obviously, the body looks great."
— Andy McCullough, The Los Angeles Times, 17 Feb. 2017

The survey found that those happiest with their jobs weren't people who spent the majority of the week in the office collaborating with their colleagues and one day a week skipping the commute.
— Jena McCullough, The Washington Post, 16 Feb. 2017

"'The Sorrowful Void' is a song that develops from the obsession for a riff and its repetition," says guitarist Michael Bertoldini. "It's the very first riff that has been written for this new EP and that single riff constitutes the majority of the song.
— Fred Pessaro, Revolver, 22 June 2018

In some cases, the sentence requires a careful read. What might seem like a noncount noun could really, in context, imply something countable. In phrases like “the majority of the community” or “the majority of the team,” the words community and team really stand for the individuals that make up those groups. “A majority of the album” might apportion a recording by its individual tracks. And there are examples like this:

Miami returns the majority of its talent at the skill positions on offense, with eight starters back from 2017.
— Matt Murschel, The Orlando Sentinel, 25 June 2018.

Talent here is being expressed as a noncount noun (though one can also say “she has many talents” in a different sense of the word). In this case, the word is being used as a metonym to stand for “people who are talented”; the sentence is saying that the majority of the players at those skill positions are returning, and players are countable.

The question then arises: do majority and minority take a singular or plural verb? The answer is most often determined, again, by the countability of the noun being apportioned:

A majority of the voters are in favor of the law.

The majority of the wine is from Argentina.

A majority of the songs feature her on guitar.

A majority of my day is devoted to keeping records.

A majority of my work hours are devoted to keeping records.

A majority of the workforce is categorized as blue-collar.

This has been the majority of our current research on the matter.