We stole from the French, then gave a little back.

English has been described as a linguistic pickpocket: a language which follows other languages closely and rifles through their handbags for loose vocabulary. Let us carry the image a little further. English is a linguistic pickpocket, but instead of hoarding its lexical loot, it tends to melt it down and turn it into something unrecognizable to the original owner. 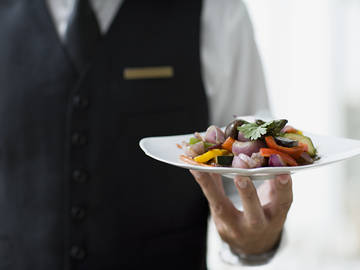 A maitre d' so efficient, you only think you need to use the plural form.

For instance, in the 1500s, English stole a term directly from French for the head steward of a household: maître d'hôtel. The French literally translates to "master of the house." We maintained its spelling (for the most part) and attempted to keep its Francophonic pronunciation (for the most part), but in time, we began messing with it.

In the early 1900s, maître d'hôtel was shortened to maître d', and the real fun starts. The English pronunciation of maître d'hôtel is /may-truh-doh-TELL/play . The emphasis is placed on the last syllable of -hôtel, which is no longer there in the shortened maitre d'. We did as English speakers are wont to do: we jettisoned all pretense that the word is French and gave it a pronunciation that makes more sense to English speakers: /MAY-truh-DEE/play .

Then there is the spelling. The circumflex over the -i- comes and goes, as English doesn't naturally use a circumflex. Another thing English doesn't naturally feature are words that end with punctuation. Some writers take care of that by altering the word to maître de, though the more common spelling is still maître d'. But this opens up another can of linguistic worms: what's the plural of maître d'?

Following the rules of English pluralization, a word that ends in a consonant, like d, gets an -s to create the plural. This gives us maître d's. But at the same time, English speakers have been told, over and over again, that 's is not the correct way to pluralize a word. So we have evidence in our files of maître ds and even maître des. As if this is not hypercorrective enough, we have evidence of writers going back to French spelling conventions for the plural and using maîtres d' into English prose.

So what is the plural of maître d'? It is an English word, which means it gets a normal English plural. Our most common (and therefore preferred) plural spellings of maître d' are maître d's or maitre d's.

You could just call them headwaiters, too.