The Back and Forth of 'Litany'

You probably learned it in church.

The noun litany has come to mean a sizable series or set of something, often used in the phrase "a litany of":

A litany of NFL stars have retired early in recent years, with most of them citing the dangers of football as the primary reason they decided to hang it up.
— Alex Reimer, Forbes, 28 Mar. 2016

The bet paid off in the short term: The third quarter of 2018 brought record-breaking profits for Tesla after two years of negative cash flow. The company had $6.8 billion in revenue, despite a litany of production delays and delivery issues.
— Taylor Telford, The Washington Post, 18 Jan. 2019

There are a litany of obstacles associated with coffee conservation. In Madagascar and Tanzania, for example, some species are clustered in small areas, leaving them more vulnerable to a single extinction event. On a larger scale, habitat loss, land degradation, drought and deforestation also pose significant risks.
— Meilan Solly, Smithsonian, 17 Jan. 2019

There’s a bit of a shadow cast over litany, as it often (though not always) groups together the kinds of things that present a hardship (such as delays or obstacles) that you'd rather do without. 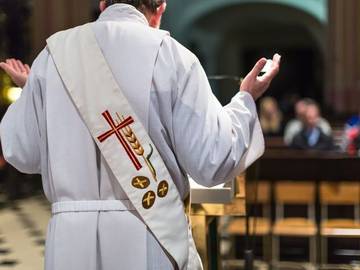 It wasn’t always this way. Litany originates in the church. Deriving ultimately from a Greek word meaning “supplicant” (litanos), litany originally referred to a kind of call-and-response prayer, where invocations and supplications uttered by the person leading the prayer are answered by the congregation.

So absorbed was the young cynic he forgot to rise from his knees at the proper place, and was still in an exemplary attitude of devotion when, the litany over, the first hymn was given out.
— Charlotte Brontë, Shirley, 1849

One example of a litany is the Litany of Trust, in which the convocation calls out "Deliver me, Jesus" after lines such as "From the belief that I have to earn Your love" and "From all suspicion of Your words and promises."

The back-and-forth nature of a litany has been likened to a chant—repetitive and lulling—and chant can be used as the verb for uttering this kind of prayer.

There was a full service at the cathedral, and as the verger marshalled him up to one of the empty stalls, a little spare old man was beginning to chant the Litany.
— Anthony Trollope, The Small House at Allington, 1864

Litany came to be used for any kind of text or refrain that is recited, such as well-known film dialogue:

First there was a palpable wave of love flowing between the actors and the overly-exuberant Lebowski lovers. … And the fanboys in the crowd could hardly contain themselves, screaming a nearly constant litany of lines from the film.
— John Del Signore, Gothamist, 17 Aug. 2011

He handed us our menus, quickly retrieved our iced teas ($1.99 each) and recited the litany of specials offered that day.
— Thomas Bruch, The Peoria Journal Star, 19 Apr. 2017

The notion is that a litany is so repetitive that it becomes exhausting to read or overly familiar, and that’s why the “sizable series or set” sense of litany is often paired with items that are themselves too common or predictable and require some effort to listen to or endure, as in “We heard a litany of excuses for why the job wasn’t finished.”