Anyways is a real word and has seen use meaning "in any manner or respect" for over 800 years. Many believe the newer usage of "anyways" meaning "at any rate, in any case" is not a real word, but it and other modern usages of "anyways" have consistent use for at least 100 years as well confirming that it is a real word.

The question of whether a word exists or not is one that many of our readers struggle with on a daily basis. Others, however, have no doubts about the existence of a specific word. An example of this second group may be found in the people who comment on our entry for anyways. 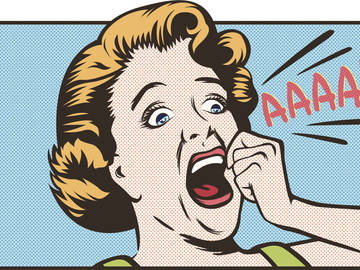 Yes, 'anyways' is in the dictionary.

Anyways is not a real word.

I'm amazed that that this improper use of the word anyway has become a real word. Bad English. I will NEVER use this word and I'm amazed at the people that use it with great authority.

UNBELIEVABLE! This is one of my pet peeves. Anyways is NOT a word. Webster is not the only one doing it either! The other dictionary cites I checked are also listingi it now and referring you to anyway.

Was looking for proof that it really is not a word, for my own satisfaction.

Not only do we define anyways (gasp!), we give the word multiple senses (look away, children!). Is the English language dead and have we killed it? No. We define these senses because people have used this word in different ways over the years, and one of our duties as a dictionary is to attempt to catalog such variation of use. The oldest sense of anyways is “in any manner or respect,” and it is pretty old, having been in use since the early 13th century. Not only have we been writing anyways for 800 years, it wasn’t just slipped in as a mistake in one or two old scrolls; the word may be found regularly over the centuries.

And M. Hurt, M. Iackson, M. Freeman, & M. Gregory testify, that he did of his own free will without compulsion anyways.
John Darrel, A Detection of that Sinnful, Lying, and Ridiculous Discours…., 1600

For such persons as cannot make use of these, I advise them, for Travelling, to make use of the half English saddles, which being well stuffed and soft in the Seat, almost as low before as behind, and exactly shapt, will although they be set upon little Cushions neatly stuffed, be abundantly closs and low upon the Horse's back, and have the same conveniences with the full English saddles, without being anyways incommode or uneasy to those who have soft and Tender Buttocks; people make such saddles wonderfully well at present.
—Jacques de Solleysel, The Parfait Mareschal, 1696

…while the very near relationship that subsisted betwixt Boswells and the wife, now the widow of John Boll, are entirely exclusive of the idea, that he should have been anyways ignorant or uninformed as to such an event.
—Jean Ballantyne, Ans.-Mrs. Jean Ballantyne, to the Bill of Advocation, 1800

When anyways is used today in the sense of “to any degree at all,” it is usually viewed as dialectical (which is not a fancy way of saying “wrong”). But this is not the use of anyways that most people are complaining about. The sense provoking the most spleen is the one meaning “at any rate, in any case.” This sense is a relative newcomer to our language, having been documented in writing only since the early 19th century.

Anyways, he could not jist then ha' stirred, having concertit a plan wi' his corporal, the man whom Donald had seen, and who had told him o' the buoat drawn up, as if to carry aff the malt.
—The London Magazine, Feb. 1828

Then I on'y ran this way an' that way, an' groaned for snow to knock off. I knowed we was driftun mubbe a twenty leagues a day, and anyways I wanted to be doun what I could, keepun up over th' Ice so well as I could, Noofoundland-ways, an' I might come to somethun, — to a schooner or somethun.
—Robert Lowell, A Raft That No Man Made, 1866

Anyways, he never come back to deny it. You've turned up, plain, plumb providential for all concerned.
—Rudyard Kipling, Captains Courageous, 1897

Anyways, I've got my opinion, and I'll resk forty dollars that he can outjump any frog in Calaveras county.
—Mark Twain, The Notorious Jumping Frog of Calaveras County, 1874

In other words, we see written evidence for anyways pretty much everywhere.

Most of the early examples of anyways in this sense come from dialogue, or attempts to replicate a character’s speech. This does not mean that the word is not real. It may be that many people wish that the word were not real, since they do not much care for it. However (and if we are the first ones to break this to you we are very sorry), wishing that something were not so is not a terribly effective way of effecting change in this world.

Modern uses of anyways are often encountered, used with a variety of meanings and in a variety of registers, in Canada and India.

Stop browsing your ex-partner's Instagram, says Renew's Amy Chan. "It's not loving to yourself when you're stalking your ex," she says. "You know the outcome of it is you're going to feel bad. But you do it anyways because you're addicted.”
—Megan Haynes, The Toronto Star (Toronto, Ont.), 9 May 2017

For now, the kids are under the care of their grandparents. "The boys' mother anyways wanted to leave them in her parents' custody.”
—The Hindustan Times (New Delhi, India), 8 Aug. 2017

While the CFL hopefully won't be making any further changes to its rules in the middle of the season, it will surely need to continue revisiting the balance between getting calls right and making the viewing experience the best it can be. It should probably be doing that all the time, anyways.
—Daniel Austin, The Calgary Herald (Calgary, Alta.), 3 Aug. 2017

Anyways, it's a Word

If a word has been in constant use for over 800 years, with tens of thousands of examples in writing across many linguistic registers, and is commonly and consistently used with specific meanings, it then becomes very difficult for us to understand how you could describe it as not ‘real,’ or not a ‘word.’ Unless, of course, you are using a sense of real or word that we are unfamiliar with.

If you are disappointed to hear that anyways is indeed real, perhaps we might supply you with a genuine fake word as consolation (we don’t want you to feel sad). How about spuddlegruncher? It means “the first glimmers of what will undoubtedly turn out to be a massive headache when one realizes that one is having an argument with someone who is basing their entire position on a dim memory of what a former English teacher told them long ago and a strong desire to tell someone else that they are wrong about something.”