Martial is an adjective used to describe things related to the military or war (as in martial law). Marshal can be used as a noun referring to a ranked position in the fire or police department and the military, and is also a verb meaning "to lead or direct a group in a careful way." Marshall is an occasional variant of marshal, and also is used for proper names and places.

The words martial and marshal and marshall sound exactly the same, which makes them a beastly trio. We're going to help you set them straight. 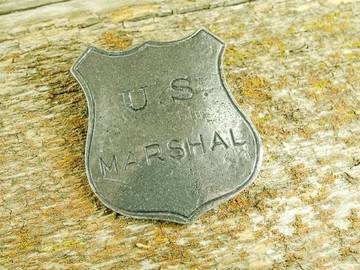 And we won't even make you wait until high noon.

What Does "Martial" Mean?

Martial is only ever an adjective, and it's all about war. Use martial to describe the following:

things related to or suited for war or a warrior, e.g., martial prowess, martial rhetoric

things relating to an army or to military life, e.g., martial discipline

people experienced in or inclined to war, e.g., a martial people

Martial is also paired with the word law in the term martial law, which refers to two particular kinds of law applied or administered by a military:

Martial comes from the Latin martialis, meaning "of Mars"—Mars in this case being not the planet but the Roman god for whom the planet was named. Mars was the god of war and one of the patron gods of Rome itself. His realm was all things military. His reputation as a fierce fighter connects nicely with our modern term martial arts, which refers to skills of combat and self-defense. We have no idea how Mars would have fared in a court-martial, which is a military court or trial. All of those gods were known to behave pretty badly from time to time.

What Does "Marshal" Mean?

Marshal is a different word entirely, despite the fact that it sounds exactly the same as martial and that it also wanders into military-related semantic territory. (Marshall is, by the way, a long-established spelling variant of marshal. The two l's usually get used for proper nouns, like names and places—and stores—but both common noun and verb uses of marshal are sometimes spelled marshall, especially in British English.)

But back to marshal: the word also differs from martial grammatically. It's a noun and a verb, and not an adjective.

Marshal as a Noun

As a noun, marshal always refers to a person who has some particular set of official responsibilities. Some of these marshals are long dead, since we're no longer in medieval times. (See the full definition for deets.) In modern English, a marshal is usually one of the following:

an administrative officer having duties similar to those of a sheriff

the head of a division of a police or fire department

a person who arranges and directs ceremonies or parades

There are also (British) field marshals and the maybe-sitting-next-to-you-on-that-airplane sky or air marshals.

Marshal as a Verb

Marshals don't always marshal, but when you want a verb, it's marshal and not martial you're after. As a verb, marshal usually means:

to arrange (a group of people, such as soldiers) in an orderly way, e.g., marshalling troops/forces

to move or lead (a group of people) in a careful way, e.g., a teacher marshaling students

to arrange or prepare (something, such as your thoughts or ideas) in a clear, effective, or organized way, e.g., marshaling an argument

Etymologically, there's no relationship between Mars/martial and marshal. English got marshal from French, but unlike most such words, it's not Latin in origin—it's Germanic. In the last centuries of the Roman Empire, the Germanic Franks occupied what is now France and left behind a substantial linguistic legacy, including what became medieval French mareschal. Mareschal came from a Frankish compound noun corresponding to Old High German marahscal, composed of marah, “horse” (Old English mearh, with a feminine form mere, whence English mare), and scalc, “servant” (Old English scealc). The original "marshal" was a servant in charge of horses, but by the time the word was borrowed from French into English in the 14th century it referred primarily to a high royal official.

And that's a whole lot of information about two words. Here's the summary: if you want an adjective, use martial to describe stuff to do with wars, warriors, fighting—that kind of thing. If you're trying to refer to a person, use marshal (the one that looks more like a name). Same for if you want a verb; marshals (but not just marshals) marshal. Use marshall for proper names, and for all the things marshal does, but be prepared for people to tell you it's marshal you want.