Running After the History of 'Lackey'

English has many synonyms for sycophant, but each synonym has its own subtle connotation that makes it unique. One synonym for sycophant also has a fascinating history: lackey. 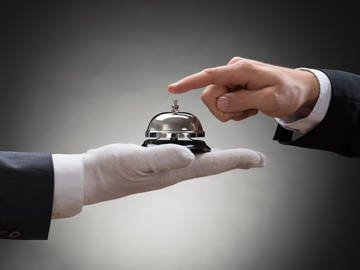 White gloves are not required, but a good pair of running shoes might help.

You may think, looking at the word, that it's a play on the word lack: perhaps a lackey is someone who lacks their own opinion, or who lacks a backbone. A reasonable assumption that's also totally wrong.

Lackey is a direct borrowing into English from the medieval French word laquais. According to the Oxford English Dictionary, the French word referred to a kind of foot soldier in the 15th century, prior to the word being taken into English.

By the time we borrowed the word into English, it had another meaning: "footman." A footman in the 16th century was a servant who either attended a rider, or who ran alongside or in front of his master's or mistress's carriage. They watched for and cleared obstacles in the road so the carriage didn't overturn, and sometimes ran ahead to prepare the destination for their master or mistress. The footman's job was hard work: in fact, they were often called running footmen to underscore their main task.

It didn't take too long before the English word lackey gained a new meaning to refer to an obsequious follower, or someone who "runs after" another person. This was used metaphorically:

In Politicks no Man more a Lackey and Slave to Tyrants than he.
— John Milton, A Defense of the People of England, trans. Joseph Washington, 1692

In March, she has a lackey order tons of seeds and start them … . In April, she sends minions to scout out what local garden supply houses are offering and report to her on the double.
— Lynn Van Matre, Chicago Tribune, 6 June 1991