How a folk song became a term of derision.

The spiritual song popularly known as “Kumbaya” is believed to have been first recorded in 1926 by a man known only as H. Wylie, a member of the Gullah people from the islands and coastal regions of the southeastern United States. ‘Kumbaya’ is often translated as “come by here” in the creole Gullah language. 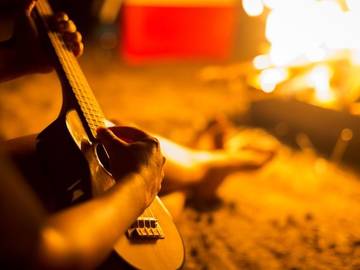 For a time, the song’s origin had been partly obscured by an apocryphal story that a white evangelist named Marvin V. Frey, who secured the copyright on the song, had written it in 1936. But the song’s actual origin became clearer when a wax cylinder recording featuring H. Wylie and dating from 1926, along with a manuscript dated from the same year, were unearthed by Stephen Winick, an editor at the Library of Congress.

For later generations, exposure to “Kumbaya” came during the folk revival of the 1950s and ‘60s. Among the first revival recordings was one made (as “Kum Ba Yah”) in 1957 by the Folksmiths, who claimed without evidence that the song had originated in Angola. “Kum Ba Yah” was recorded several more times in following years, notably by Pete Seeger (as “Kumbaya” in 1958) and Joan Baez (1962). The song became a staple of campfire unity and an anthem of the civil rights movement, sung at vigils and protests.

The song’s lyrics, with “kum ba yah” interpreted as “come by here,” are an entreaty to God to come help oppressed folk, with later verses calling out indications of suffering (“someone’s crying, my Lord”).

In recent years, however, kumbaya has become a term of derision, having been associated with what are considered naïve and unrealistic attitudes of peace, harmony, and cooperation.

Sure, I'd mention that I was not the first one in the house to ever keep a diary, but it wasn't the reason I'd fallen love with the place. At the risk of sounding too kumbaya, I felt as if I had finally come home. A cruel trick of fate had kept me away, but now I was back to claim what was rightfully mine.
— David Sedaris, The New Yorker, 19 & 26 Apr. 2004

“The whole family thing — that Madonna was the mother figure to all of us — that was a situation that she spun so that she could be seen in a different way for her own brand,” dancer Carlton Wilborn told me last year. He’s featured in the 2017 documentary “Strike a Pose,” which is available on Netflix and catches up with the dancers nearly three decades after their career-defining experience with the “Blond Ambition” tour and “Truth or Dare.” “Madonna made it appear that she collected us and made this kumbaya scenario,” Wilborn told me. “I never bought into it, but (for the film) I played like I was buying into it.”
— Nina Metz, The Chicago Tribune, 30 Aug. 2018

This relatively scornful and cynical use of the term often can be found in phrases such as kumbaya moment, referring to an effort to get opposing interests to reconcile in the name of harmony.

Lemay has no illusions of bringing about a kumbaya moment between proponents of antithetical worldviews—her aim is simply the fostering of a space in which ideas can play off of one another constructively.
— Ryan P. Smith, Smithsonian, 20 Aug. 2018

In a July press conference Booker said of those supporting Judge Kavanaugh: “You are either complicit in the evil, you are either contributing to the wrong, or you are fighting against it.” He then had a kumbaya moment and instead called for everyone to love one another.
— Lauren DeBellis Appell, FoxNews.com, 4 Sept. 2018

During the concert (which was amazing) the lead singer gave several impassioned speeches about kindness and acceptance, which elicited roars of approval from the crowd. Alas, the kumbaya moment of tolerance and camaraderie lasted no longer than the set list as thousands of irritable, sweat-soaked people descended on the parking lot to embark on the mass exodus from the venue.
— Sherri Leimkuhler, The Carroll County (Md.) Times, 15 Sept. 2018

The song has become so entwined with calls for restraint, tolerance, and unity that some politicians have imbued the word kumbaya with a sense of undue fecklessness that they wish to pin on those with whom they disagree, particularly during those times of national threat (such as wartime) when aggressive talk tends to be regarded as more patriotic. As Michael E. Ross wrote in The Root in 2008: “Derision of the song and its emotional foundation has become a required sign of toughness and pragmatism in American politics today.”

And so kumbaya has come to evoke a moment of earnestness that comes across as weak or sappy. That’s the kind of cynicism might prompt a person to ask: Can’t we all just get along?