The feline implications are a modern development. 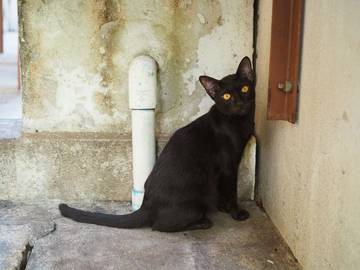 In the French of the 14th-16th centuries, quatre, the word for "four," could also be spelled catre. English speakers said "ooh, that's handy" and snapped the term right up, but very sensibly, we think, spelled it cater. They already had a perfectly good word for "four," of course (it being four), but they liked that cater word for playing games and used it to refer to the four of cards or dice.

The four spots on dice, or four symbols on cards, can be seen as making an X, and it's suspected that this is how cater came to develop the extended senses of "diagonal" or "diagonally." English made it into a verb meaning "to place, move, or cut (across) diagonally," as in "cater the pieces on the board," but that never grew beyond some dialectal use. Also largely destined to flourish in dialects were a number of compound words that used cater to mean "diagonal" or "askew": such as catabias and catawampus. Catercornered (and later catercorner) caught on more broadly.

Eventually the dice and cards were forgotten and that first syllable settled very cat-like into a sunny spot in the lexicon and spread itself out: catty-corner and kitty-corner (and their -ed variants) were the inevitable outcome.