The English language has a lot of words for kiss and kissing. There are so many, in fact, that one might be excused for wondering if we haven't a few too many, and could perhaps trade some of them to another language, for a more useful word. One meaning "a socially uncomfortable ride in an elevator," perhaps. 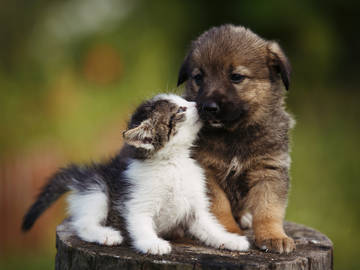 This adorable romance needs its own kiss descriptor

Alas! Although languages do indeed borrow and trade words, it seems to never be in a quid pro quo fashion. And anyway, there are reasons why English has so many synonyms for this (and it's not just because many people like to kiss).

There are a great many slang, or informal, ways of referring to a kiss, which often carry very specific definitions. We have words such as peck ("a quick light kiss") and smouch (a dialectical word which gave us smooch, and which means "a slobbery smacking kiss"). The Scottish dialect gives us smoorich ("a stolen kiss"), and, although it is more often used to mean a dollar, smackeroo can also refer to a hearty kiss.

Mayor Carson, whose predecessor in office, George L. Baker, was the No. 1 all-time osculatory champ, balked at the suggestion that he plant a smackeroo on the ruby lips of a Pasadena band drum majorette during the festival parade.
—The Oregonian (Portland, OR), 13 Jun. 1938

At the conclusion o' the reel, ilka Jockey tane his Jenny into his brawny airms, gied her an awfu' hug as is he had been gaun to burk her, an awfu' smoorich o' a kiss as if he had been gaun to wirry her, an' then flang himsel' doon on a furm beside her wi' sic a fearfu' pergaddus that naething but whinstane an' yettlin' could weel withstand it....
—W.D. Latto, Tamma Bodkin: or the Humours of a Scottish Tailor, 1868

He gives her the smouch with his hand on his pouch....
Peter Mews, The Ex-Ale-Tation of Ale, the Anciant Lickquor of this Realme, 1646

But lest you think that our abundance of kissing words is composed entirely of dialect and slang terms, let's look for a moment at what our 17th-century lexicographers offered in this area. Both Edward Phillips (in his 1658 The New World of English Words) and Elisha Coles (in his 1676 The English Dictionary) appear to have differentiated between osculation ("a kissing") and deosculation ("a kissing with eagerness"). Neither scholar appears to have found the word for "a kissing with reluctance."

Many of the 17th and 18th century dictionaries also provided definitions for some of the racier forms of kissing, defining suavation as "amorous kissing," and, centuries before we got around to referring to it as a French kiss, defined the unlovely word cataglottism as "a thrusting out the tongue in kissing." And while we're on the subject of obscure words related to kissing, we would be remiss if we did not mention one of the rarest kissing words of all, which is miskissing. This word, which is only defined in the Oxford English Dictionary (with admirable brevity, we might add: "improper kissing"), is remarkably rare in the canon of English literature. Especially when one considers how common cases of improper kissing have been.