If you've ever travelled to Japan, or if you've ever collected Pokemon cards or drawn cat faces on your pancakes, then you are probably familiar with kawaii.

I was struck by how clean and orderly Tokyo is—and how the road signs, high-rises, and even vending machines look like art installations. Then, there is the obsession with everything cute, or kawaii: road-construction barricades shaped like pink bunnies, cartoon figures painted on buses, and even men in suits toting brightly decorated smart phones.
— Elisabeth TNT, Vogue, November 2013 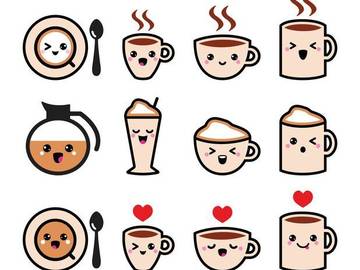 'Kawaii' is often about endowing seemingly mundane things with personality.

Often mentioned alongside anime and manga, kawaii refers to a cultural style that incorporates bright, pastel colors and childlike imagery. In Japanese, the word kawaii has a meaning that sits more or less at the juncture of "cute," "tiny," or "lovable." The cute aesthetic—with its bold, nearly cartoon-like lines and rounded forms—informs a large segment of Japanese popular culture. As scholar Joshua Paul Dale writes, "[kawaii] communicates the unabashed joy found in the undemanding presence of innocent, harmless, adorable things."

The most famous example of kawaii culture is probably Hello Kitty, the ubiquitous white feline character whose image emblazons an ever-expanding range of products and accessories. The character was commissioned by a company called Sanrio, founded by Shintaro Tsuji, in 1974, with a plastic coin purse as the first product bearing the image. Now Hello Kitty is found on everything from backpacks to food trucks to duct tape to kitchen appliances to adult toys. Even though the character was originally intended for preteen girls, its limitless branding has pushed it into essentially every demographic and business sectors that have nothing to do with childhood.

But kawaii is about more than just fashion. It's often about endowing seemingly mundane things with personality.

In some restaurants, for example, pastries or mounds of rice might be sculpted to resemble cartoon characters. The saturation of kawaii in Japan is so deep that the name attaches to widely disparate phenomena, from bubbly handwriting to road signage to the designs painted on the sides of passenger jets. Even police departments, perhaps regarded as otherwise impersonal, are provided with kawaii mascots to give them a more approachable feel.

So the next time a barista puts a cat or bear or bunny face in your cappuccino foam, you'll know what to call it. And make sure you Instagram it for the rest of us.