We hope you jibe with our advice.

Does your gibe jibe with your jive? Or is your jibe jiving with your gibe? This trio of words has some overlapping qualities (not to mention letters), and has been troubling people for some while. 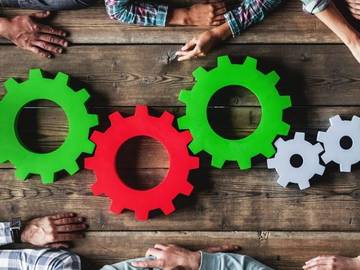 They make a gibe, and jesting stocke,
at such as doe despise
Their wicked factes, they grine and mock,
at euerie good deuise.
— Anon., The Banquett of Dainties, 1566

If thou the good, and godly doest obay,
And listned hast, and leande to their behest,
Let the vngodly say what they can say,
Blushe not to heare them boldly gibe, and jeste
If any filthie acte thou haste in mynde,
Thinke thousandes stande before thee, and behinde.
— Gregory of Nazianus (trans. by T. Drant), Epigrams, 1568

We do not see evidence of jibe with the meaning of “to be in accord” until the beginning of the 19th century, although the word does exist prior to that with other meanings. Jibe, for instance, is commonly found as a variant spelling for the meanings of gibe listed above.

With her husband mistrusting her, the children jibed at by their playmates and the esteem of her neighbors gone, Mrs. Julia, in desperation, went to the office of a notary public.
— The Pittsburgh Press, (Pittsburgh PA), 22 Jul. 1934

Occasionally these two will swap positions, and gibe will be found as a variant form of jibe, typically in the form “doesn’t gibe with," but most usage guides and publications that care about this sort of thing consider it to be in error. Why does jibe get to dress up and pretend to be gibe, but gibe gets sent to its room with no dinner every time it tries to be jibe? Because the English language is not fair. And anyone who ever told you otherwise does not have your best interests at heart.

Jive is a more common variant of jibe than gibe is. This word (which may mean “glib, deceptive, or foolish talk” or several other things) began appearing in print in the late 1920s and waited little more than a decade before it started being used in the sense “in accord with; agrees with.”

The American leaguers had a headache in making their line-up. An all-star game without Hank Greenberg would be like borscht without beets. The thing just doesn’t jive.
— Morris Weiner, The Wisconsin Jewish Chronicle (Milwaukee, WI), 15 Mar. 1940

If bowlers weren’t sensitive, we’d call them suckers for bowling for a prize against these fellows. All told, there are 18 in this ‘classic.’ The ‘house-men’ and 14 pluggers. And that doesn’t jive right.
— Nick Grande, Newsday (Long Island, NY), 8 Oct. 1943

Now, according to a nationally known musical magazine, all of Rose’s Broadway productions, including “Carmen Jones,” face a union ban by the American Guild of Variety Artists over a situation existing at the Diamond Horseshoe, which doesn’t jive with union ideas.
— E. B. Rea, The Baltimore Afro-American, 12 Apr. 1944

The use of jive as a variant of jibe seems to have increased each decade since the 1940s, and may often be found in reputable and edited sources today.

But Marseille's multiculturalism doesn't jive with an increasingly strong demand for secularism across France, exacerbated by the terrorist attacks of the last 18 months.
— Marco Chown Oved, Toronto Star, 25 Jul. 2016

The media culture seems to have been infected, as much of what we read and hear doesn't jive with what we otherwise know to be true. Headlines and news stories, for instance, variously tell us that we're in trouble, we're falling behind, our plan has failed, that we're the ones "shocked and awed" by Iraqi resistance.
— Kathleen Parker, The Chicago Tribune, 2 Apr. 2003

This does raise the question of why we don't enter this sense of jive, even though we have evidence of its use since the 1940s. After all, our dictionary (and every other one that you will find today) offers many definitions for words which are commonly thought of as ‘mistakes,’ such as the use of literally to mean “virtually” or “in effect.” The reason is that literally has been used to indicate emphasis or figurative use for literally hundreds of years (since the 1760s, at least), and is used in this manner by millions of people. So far, neither jive nor gibe as substitutions for jibe has this kind of record, but it seems possible that this use of jive will increase in the future, and if it does dictionaries will likely add it to the definition.

Here is your shorter holiday checklist for these three words: