What Does "Jiggery-Pokery" Mean?

The announcement today of the Supreme Court's decision on the fate of Obamacare was met online with paroxysms of delight, rage, and (in slightly smaller quantity) amusement. The feelings of delight and rage were largely motivated by one's political leanings; the feelings of amusement were provoked by a phrase employed by Antonin Scalia. 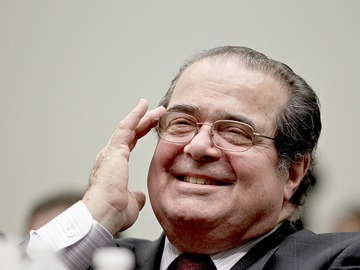 In his dissent, Scalia waxed furious about the "interpretive jiggery-pokery" employed, in his view, by the majority of the court in their decision. Few onlookers took exception with the word interpretive, but what follows that word is a turn of phrase rarely seen in legal writing, and aroused the interest of many.

Jiggery-pokery (meaning "dishonest or suspicious activity") is a fine example of what is referred to as rhyming reduplication, and Scalia appears to have more of a fondness for this type of language than do most of his fellow justices (he used the phrase argle-bargle several years ago in another decision). There are many such examples in English; razzle-dazzle, teeny-weeny, nitty-gritty, and perhaps the most applicable of all for use in a Supreme Court decision: phony-baloney.

Jiggery-pokery comes from Britain, as does most of the finest rhyming slang and spicy mustards, and has long been thought to have originated at the end of the 19th century. However, recent research has indicated that it is older than previously thought. The earliest known use of the phrase comes in 1845, in an article of December 27th from the Berkshire Chronicle (a newspaper from Reading, England), entitled Protection to Agriculture: "...under the present law, the averages were made up so faithfully and fairly as to prevent any jiggery-pokery."

Based on the above citation, Scalia can now point out that jiggery-pokery has been used to describe legal matters for at least 170 years, and as such, should be considered stare decisis, or at least settled law.