A New Dictionary for a New President

For most of us the dictionary lacks glamorous associations. Perhaps that’s why the black-and-white photograph of President Kennedy in the lobby of Merriam-Webster's headquarters is so arresting. There among the yellowing ad copy and dated company portraits lining the walls near the marketing offices is the president in 1961. He's tan and trim, with a dictionary in his hand—and not just any dictionary, but a brand-new Webster’s Third! The scene seems right out of Mad Men: the ultimate in product placement. A new dictionary for a new, young President, edited in accordance with new principles that would cause controversy and loud criticism. It was not your father’s dictionary. 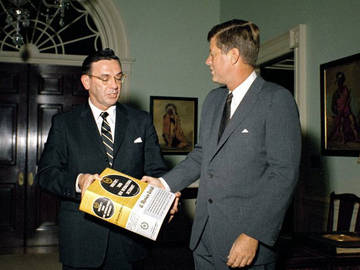 Perhaps the company couldn’t get the President’s endorsement, but a connection was made by others. On November 30, 1961, The New York Times ran two short related pieces. One, a brief news article gently censuring the President’s use of the word finalize, cited the definition from Webster’s Third. Finalize, the article implied, was not the kind of word the President of the United States should be using in a news conference. 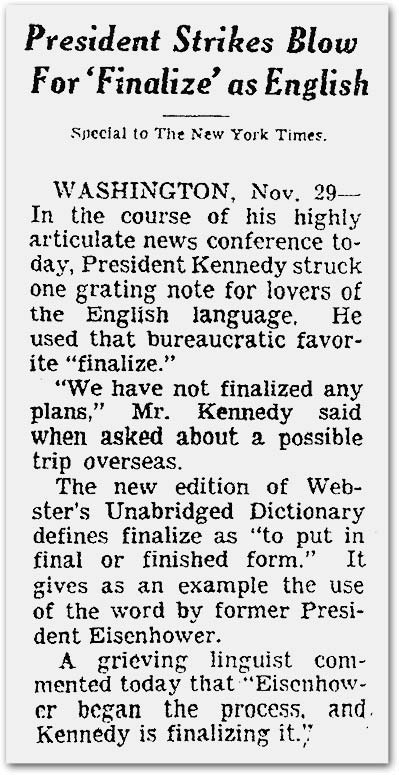 The second piece, an unsigned editorial likely written by the resident language watcher at the Times, Theodore Bernstein, had a sharper tone, making the criticisms of both the President’s word choice and the dictionary itself explicit in what might be viewed as a fine example of pre-Internet proto-snark. 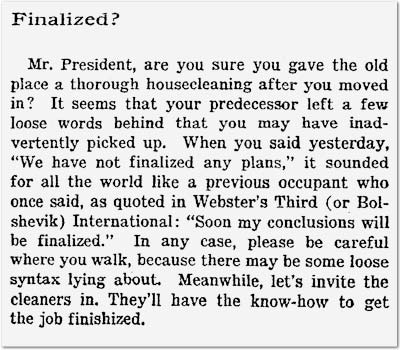 Finalize in print dates back to 1901. Linguist Mark Liberman, writing for Language Log about these articles, posits that it normally takes about fifty years for a scorned but regularly derived English word to become “de-scorned”—and indeed, few people today object to the use of finalize (though the word still merits a usage note in its dictionary entry).

But what about that photograph?

The caption on the wall in the office reads “U.S. Congressman Edward Boland from Springfield, MA presents President John F. Kennedy with a copy of the flagship volume of Webster’s Third New International Dictionary, Unabridged on Dec. 5, 1961.”

The late Congressman Boland was a beloved figure in Springfield (there’s even a statue of him downtown), and it would be safe to assume that the photo was from the local newspaper. But archival research comes up with nothing. The source can be found in the John F. Kennedy Presidential Library and Museum. Laurie Austin, an audiovisual archivist at the library, provided the photograph in its original crisp, full-color, uncropped form. The impromptu shot was taken in the White House residence by Robert L. Knudsen, an official White House photographer. With the help of the Presidential itinerary, Austin was able to show that the picture could not have been taken on December 5, since the visible window in the photo reveals that it was evening, whereas Kennedy left for New York City that afternoon. But on November 3, the date borne by the archival photo, his schedule shows that he was at home in the evening.

This leaves us with some deducing to do. There was apparently no documentation of the visit beyond the photograph—in fact, the archival photo didn’t even identify the other man. What we know is this: the two men were friends. Boland was sworn in as a congressman on the same day that Kennedy was sworn in as a senator. Boland later worked as Kennedy’s campaign chair in Ohio. The Irish-American Congressman accompanied Kennedy in June of 1963 on his triumphant visit to Ireland and was singled out in the President’s remarks in Cork. So this must have been a friendly and unofficial after-hours visit, an occasion to present the President with a product from a Massachusetts company headquartered in the congressman’s district.

The vigor the President conveyed so often in photographs seems to be on display here: he grasps the fourteen-pound book as if he were about to take it with one hand. But this might have posed a problem because of his physical ailments. In the sad Editor’s Note in the November 29, 1963, issue of Life magazine, Managing Editor George P. Hunt shares some personal reminiscences about the assassinated President, concluding with an anecdote that “revealed to me the guts he had.” During a visit to the White House by Hunt, the President showed him a hunting rifle that was to be presented to a visiting head of state, but asked that Hunt help him: “It weighed nine pounds, he said, but he couldn’t even lift it. He asked me to help him and I did.”

By coincidence, the preceding page of that memorial issue of Life featured a color ad for Merriam-Webster dictionaries. As the ad says, a big new dictionary makes a great gift. Kennedy knew the importance of language, and we still recall his soaring and symmetrical rhetoric, delivered in his distinctive accent. A charming and poignant example of how closely that accent was tied to the emotional response to his assassination arrived in the form of a letter written to Merriam-Webster just days afterward. Here is the response from editor H. Bosley Woolf: 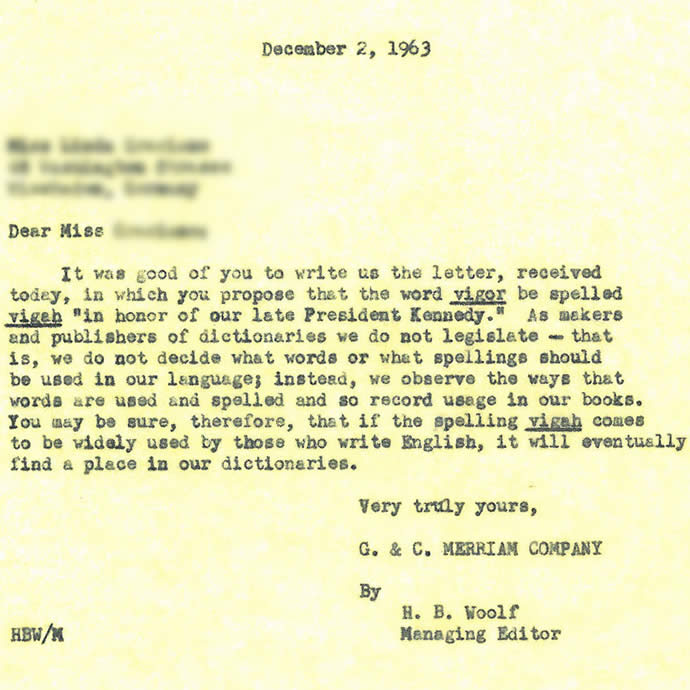