The words are often used as synonyms, but 'jealous' has more meanings

While many people believe that jealous means fearing someone will take what you have, and envious means desiring what someone else has, historical usage shows that both mean "covetous" and are interchangeable when describing desiring someone else's possessions. However, when referring to romantic feelings, only jealous can be used to mean "possessively suspicious," as in "a jealous husband."

Is there a difference between jealous and envious? That depends on who you ask. Some people have a view in this matter that is similar to that expressed by the noted lexicographic scholar, Homer Simpson: “I’m not jealous! I’m envious. Jealousy is when you worry someone will take what you have ... envy is wanting what someone else has.” Others, however, do not make this distinction, or differentiate between these two words in another fashion. Let’s look at some of the ways that jealous and envious overlap. 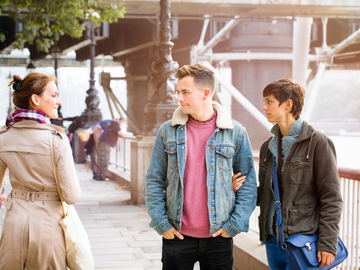 Though 'jealous' and 'envious' may both mean "covetous," only 'jealous' may be used to mean "possessively suspicious."

Both words are fairly old, having been in regular use in English since the 13th century, and both words have accrued a number of shades of meaning over the years. The fact that each of these words has numerous meanings makes it somewhat impractical to say “jealous means X, and envious means Y.” But this matter of impracticality has proven to be little deterrent to many people who have insisted that each one of these words does indeed have a single true sense.

Here are some of the comments offered on these two words, taken from usage guides published since the middle of the 20th century:

One might almost say that these two words are used as if they were interchangeable ... The words are scarcely synonymous, however. Envy means discontented longing for someone else’s advantages. Jealousy means unpleasant suspicion, or apprehension of rivalship.
—Theodore M. Bernstein, The Careful Writer, 1965

There are three different ways in which jealous can be used. The most common is ... where the meaning is “fearful of losing attention.” Another broad sense is “possessive” or “protective” ... third usage is in the sense of “envious,” as of another person because of his or her belongings, abilities, or achievements.
—William and Mary Morris, Harper Dictionary of Contemporary Usage (2nd ed.), 1985

One begins to see what a muddle questions of usage may be when one contemplates the fact that all three of the above books are making pronouncements on the words jealousy (and jealous) and envy, all of which are in some way true, and all of which are also in some substantial way different from one another. There are indeed some semantic distinctions that may be made between these words, but it should also be noted that many educated people use them interchangeably.

Envy is most often used to refer to a covetous feeling toward another person’s attributes, possessions, or stature in life. Many people use jealous to mean the same thing. “I am envious of his good fortune” could be changed to “I am jealous of his good fortune” without substantially changing the meaning of the sentence for most people. So, jealous can be used for this sense of envious.

Jealous is also often encountered adjectivally to refer to some unwelcome feelings in a romantic vein, typically in which one harbors suspicion of infidelity or the possibility that one’s love will be stolen away. An important distinction here is that envious will not serve as a substitute for this use of jealous. “He was always a jealous husband” cannot be changed to “He was always an envious husband” without substantially changing the meaning of the sentence.

So while jealous may be used to mean both “covetous” and “possessively suspicious”, envious is only comfortable in the first of those two senses. Which of course raises the following question: given that jealous has more meanings than envious, does the word envious feel envious or jealous (or both) of its synonym’s greater semantic breadth?