Are You Feeling Jaded?

You're not the only one

Everyone seems to be jaded these days: voters, viewers — maybe even you after yet another driver cut you off on your way to work.

People who are jaded have seen and done and heard enough to not be surprised or even interested easily. A politician's promises? Yeah, we've heard those before. A new can't-miss movie? We actually wish we'd missed the last one. 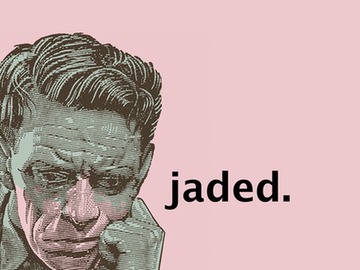 Here are some examples of the word in its natural settings:

Feeling a bit jaded about the current state of the NFL, what with so much talk about player contract issues and drug suspensions?
— Darryl Slater, NJ.com, 8 July 2015

Maybe I was just too old and jaded to care about the inner life of the American—or any other—teenager. Or maybe not.
— Leslie Gray Streeter, Palm Beach Post, 23 Mar. 2012

The world-weary and cynical weren't the first people to be described as jaded. The word first applied to those who were exhausted, especially by overwork or abuse. Mark Twain used the word this way in Tom Sawyer, published in 1876: "Early in the forenoon parties of jaded men began to straggle into the village, but the strongest of the citizens continued searching."

But before workers were jaded it was the poor horses who suffered. The adjective jaded comes from an old verb jade meaning "to make a jade of (a horse): to wear out by overwork or abuse." Yep, the noun jade used to refer to a horse that was worn-out and sick.

All of which serves to remind us that the English language often has something to offer even the jaded: surprises tucked away in the histories of words.