Is the Word 'Freshman' Going Out of Style?

On the rise of first-year alternatives

Frosh, freshpeople, and first-year are all terms that are rising in popularity instead of the historical freshman to describe first year students. Frosh is the only one, although slang in nature, that has an official entry in our dictionary. 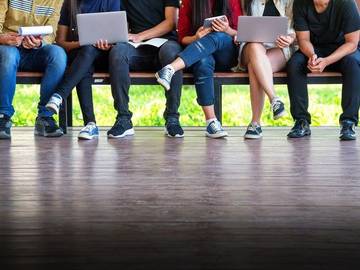 Don't worry: our content is cheaper than most textbooks.

The traditional word for a student in the first year of high school or college is freshman, but that word has had some competition in recent decades:

As every freshperson in my own department knows by the end of the first year, the "Little Ice Age" was no such thing. It was a minor glaciation.
— Harm de Blij, The Annals of the American Association of Geographers, June 2002

One of the principal summer chores of junior Res Life staffers is to run the personal traits of each incoming frosh through a program that matches a nonsmoking, occasional beer-drinking white from the suburbs who wears Old Navy clothes and keeps a robust collection of Phish albums in his iPod with a cultural soul mate.
— Barrett Seaman, Binge, 2005

Last fall, a group of first-years interested in starting a Smith Quidditch team set up an interest meeting and created a Facebook page, which generated enough publicity that they quickly had the makings of a team. — The Smith Alumnae Quarterly, Summer 2011

The last of the three seems to have the most institutional force behind it, but it doesn't come naturally to everyone:

Freshperson (and its plural freshpeople) is not doing nearly as well as the other two (in print it mostly appears in political contexts, referring to newly elected members of congress), but it does do some of the lifting in the language—though not enough to be entered in our dictionaries. Frosh, which was coined in the early 20th century, has been more successful, though its slangy feel means that it's most at home in informal contexts. First-year (also styled as first year) is somewhat self-explanatory in meaning, which has made its entry into our dictionaries lower priority than it otherwise would be, but it's likely to appear on our pages in the very near future because of its dramatically increasing popularity.

But what about that old tried-and-true word freshman? Is it still hanging on, despite that sex-specific -man part?

The answer to that question is an emphatic yes.

References to the entire group of students in their first year at a high school or college are far more likely to employ the phrase "freshman class" than "frosh class" or "first-year class." And the Internet is awash with people posting pictures of their "freshman" selves (or children).

(Note: the singular is freshman and the plural freshmen; when using the word as a descriptor go with the singular, as in "their freshman year.")

While freshmen, freshpeople, froshes, and first-years remain so for only a short while, the word freshman shows no signs of leaving.