Is That Lie 'Bald-faced' or 'Bold-faced'?

And what about 'barefaced'?

Lies come in a variety of types. There are white lies and big lies, of course, but there are also the kinds of lies told without concern for their ethical implications, in full disregard of those who will be affected. 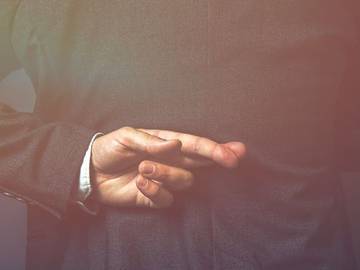 If you wanted a descriptor for such a lie in the 19th century, chances are you would have opted for barefaced (or in its slightly less common variant form, bare-faced). Lies (and, less frequently, liars) have been described as "barefaced" since at least the 1830s. The term was doing other jobs before it had that application, however. Since the late 16th century it's described those having the face uncovered, whether by being sans beard or sans mask. And in between, it developed the meaning "open, unconcealed," as in "barefaced impudence"—a descriptor for bold rudeness that paved the way for the "barefaced lie."

By the mid-20th century, it seems (though we can only speculate) that "barefaced lie" didn't sound awful enough, and the term bald-faced (less commonly, baldfaced) began to describe the lies and liars:

The fancy leaflet … says that this insurance is "comprehensive" and "pays liberal benefits." That is a bald-faced lie, experts say. The actual policy is "extremely restricted" and "extensively limited."
— J. C. Furnas, Good Housekeeping, June 1948

Mr. Koch says everybody out in the country drives a pickin' up truck and wears Sears suits. Well, sir, that's a bald-faced lie. Don't nobody around here wear a suit. Don't need to. They don't care what you wear over to the Moose Club, long as you ain't barefoot.
— William Robert "Billy Bob" Jones, Playboy, July 1982

The bald-faced lie doesn't toy with my perceptions—it argues with them. It doesn't try to refashion reality, it tries to refute it.
— Stephanie Ericsson, Utne Reader, November/December 1992

Instead of telling a bald-faced lie, why not whip up a truth sandwich, which is an honest, meaty comment between two slices of lie bread?
— Barbara Sher, Real Simple, November 2002

Barefaced over time became significantly less common, but it didn't go away:

A man can't remember where he was on the night of the tenth? Then he's lying. He can remember? Then he's too damn flip with his alibi. You go one more yard with this and everyone who tells the truth will become a barefaced liar, everyone who does a decent job will be working for the other side.
— John Le Carré, A Perfect Spy, 1986

"His daddy lives in California somewhere," Gloria said, and didn't know what made her tell that barefaced lie.
— Terry McMillan, Waiting to Exhale, 1992

And then, in the late 20th century, the term bold-faced (less commonly, boldfaced) got into the game. Since the late 16th century (back when barefaced was first describing beardless folks), the word had meant "bold in manner or conduct," or "impudent." It was a word used to describe brazenly rude types. But in the second half of the 20th century the word began to modify lie, as well as liar, with a frequency that increased as the century wore on:

... that people of otherwise unblemished character told him bold-faced lies when he inquired about their knowledge of, and involvement with, the Iowa Baseball Confederacy.
— W. P. Kinsella, Sports Illustrated, 14 Apr. 1986

Its use was sometimes questioned. A character in a 1991 Bobbie Ann Mason story called "Rolling Into Atlanta" says "People everywhere saying they're sincere and they seem sincere, but at the same time they're living a bold-faced lie." Another character responds, correcting her, "You mean a bald-faced lie," to which she replies, "I thought it was 'bold-faced' Like a headline."

The current status of this trio of lie-and-liar descriptors is this: both bold-faced and bald-faced are used, but bald-faced is decidedly the preferred term in published, edited text. Barefaced is the oldest, and is still in use, but it's the least common. To report otherwise would be a bald-faced lie.