Is 'Snake Oil' Really from Snakes?

While snake oil did at one point refer to the actual oil or grease made from snakes for believed medicinal purposes, today it means "poppycock" or "nonsense." Over time, the term eventually referred to mixtures sold as medicine without any regard to health or medicinal worth. As such, snake oil salesmen are usually charlatans and con men (often selling fake medicine and "miracle cures" that don't work).

The English language abounds with idioms and figurative uses of language, many of which would appear to reveal their origins to the person who applies some thought to the matter. For example, the conversational icebreaker (“something that is done or said to get through the first difficulties in starting a conversation or discussion”) typically entails no breaking of ice; the word comes from the name of a ship that was designed (having a reinforced bow) to perform this task.

But our language also contains many other words and phrases which, when examined, make one hope rather fervently that there is no literal origin to be discovered. Words such as headcheese, bed rot, and snake oil. Let’s leave the first two alone for now, and look at the mystery of snake oil, which may be defined as “poppycock” or “bunkum”; did it really come from snakes? 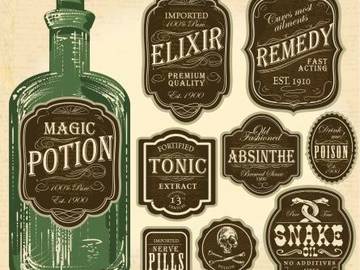 You can trust us, though.

We’ve been using snake oil, prepared in a variety of ways, for its purported medicinal qualities for hundreds of years; our records show the word has been in use in print since the early 17th century.

The grease of a snake mixed with verdegreece, healeth any part of the eye that is broken: but the slough or old skin which they cast off in the spring, doth clarifie the eie-sight, if the eies bee gently rubbed therewith.
— Pliny the Elder, The historie of the vvorld (trans. by Philemon Holland), 1634

Some vse snakes grease and oil together: also a liniment made with the ashes of snakes burnt, tempered either with oil or wax.
— Pliny the Elder, The historie of the vvorld (trans. by Philemon Holland), 1634

The Oyl of Snakes and Adders. Take Snakes or Adders when they are fat, which will be in June or July, cut off their heads and take off their skins, and unbowel them, and put them into a glass gourd; and pour on so much of the pure spirit of Wine wel rectified, that it may cover them four or five fingers breadth; stop the glass wel, and set it in Balneo til all their substance be turned into an oyl, which keep wel stopt for your use. This oyl doth wonderfull cures in recovering hearing in those that be deaf, if a few drops thereof be put warm into the ears.
— John French, The art of distillation, 1653

For those of you who have read the above citations and mused to yourself ‘I might not care to put rotted snake liquid into my ear,’ please consider that rotted snake liquid is among the least revolting things one might put into one’s ears in the 17th century. Pliny, in his inestimable thoroughness and wisdom, has a very long list of other things which people might stick in their ears to cure deafness, including (and we strongly recommend—seriously, you are being warned—that some people may wish to not read the following examples of past medical practices) the urine of a she-goat (made warm), the dung of a she-goat (as long as it is mixed with hog grease), a mixture of vinegar and the urine of a calf (as long as that animal has never eaten grass), and the sperm of a boar, retrieved from a sow (as long as it has not touched the ground). Compared to other substances which one might ingest, snake oil seems to be positively reasonable. Rattlesnakes appear to be among the types of serpent which were most prized for their oil, beginning in the 18th century.

There are three Sorts of Oils in that Country, whose Virtues, if fully proved, might not perhaps be found despicable: The Oil of Drums, the Oil of Rattle-Snakes, and that of Turkey Bustards.
— The History of the works of the learned (London, Eng.), Dec. 1742

A youth, affected with this disease, was relieved by taking an ounce of rattle-snake’s oil; and a hunter, molested with colic, cured himself by drinking half a pint of bear’s grease.
— Jeremiah Barker, The Medical Repository (New York, NY), 1 Aug. 1802

It should be noted that in many cases the ostensible snake oil contained no essence of actual snake. By the late 19th century snake oil was being used in a variety of broadened senses. One, which has not survived into common use of today, was as a synonym for liquor.

We are informed that one of our citizens got off of his “K-Base,” and went home last Sunday night while under the influence of snake-oil and turned the house out of doors.
— The Leonardville Monitor (Leonardville, KS), 19 Nov. 1885

A St. Louis lawyer, who had been for years a department house for wines, liquors and cigars and always kept in stock an ample supply, got an attack of religion lately, went home and sweated for three days. He says that he got extra well filled with “snake oil” and out of bravado went to a tent meeting and listened to a sermon on scoffing the Lord.
— The Catholic Advance (Wichita, KS), 18 Dec. 1909

At the end of the 19th century snake oil also began to be used in the sense of “a mixture sold as medicine usually without regard to its medical worth,” followed shortly thereafter by the meaning of “nonsense; empty talk or writing.”

The snake-oil venders paid our town a visit on Thursday and by their oily ways snaked a good many 50 cent pieces away with them.
— Santa Maria Times (Santa Maria, CA), 1 Nov. 1884

Wonder what the parents of the lad working for the snake oil salesman think? About ‘steen times a day the boy has to submit to a cold water head wash.
— The Buffalo Enquirer (Buffalo, NY), 17 Jul. 1923

It is pure snake oil that this asked-for demonstration of faith for April 8 will solve all of Canada’s problems….
— The Brandon Sun (Brandon, Can.), 27 Mar. 1963

Snake oil is typically used today to describe charlatans, or some act of dishonesty (the word is frequently paired with salesman). While snake oil salesman may not be the most admirable types, thanks to semantic drift we at least can be sure that they are not trying to sell you any liquid which has been steeped in actual rotted snake.