Sometimes the way a sign says something makes us curious. So it is when positively is used to tell people what they most certainly are not allowed to do: 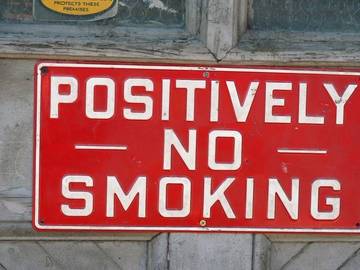 Sure, it means "definitely no trespassing" and "absolutely no admittance," but the context is formal, even legal, and all of these words—positively, definitely, and absolutely—tend to be used for emphasis when we're talking about—maybe even exaggerating about—everyday things like, say, pie. We wondered: is there a legal meaning of positively that isn't commonly known?

The meanings of positively are basic adverbial extensions of the adjective positive, which is why positively doesn’t have its own entry in the Merriam-Webster.com dictionary, but is instead covered at the entry for positive, so we'll dig in to its senses here.

Most often, positively is used to stress the truth of a statement or conviction behind it:

The new bakery's pies are positively the best pies I have ever had.

I positively refuse to ever make my own (inevitably inferior) pie again.

I am positively devastated at the idea that the bakery may someday go out of business.

It's also used to mean "in a positive way":

The bakery has been reviewed positively, which means it's likely to do well.

Still, I'm worried. I need to think positively: I can help ensure the bakery's success by buying pies there daily.

It's a sacrifice, of course, but one I am positively prepared to make.

(Positively also has technical applications to do with positive electric charges, as in "positively charged ions," but they don't have much to do with either pie or signage.)

The positively in "positively no trespassing" can be most easily understood as an application of the first use: it stresses the "no trespassing." But can it also be understood as an application of the "in a positive way" if we look a little more closely at the history of the word positive? That word was in its earliest days used to describe positive law—that is, law established or recognized by governmental authority—as opposed to natural law—the "laws" that seem to be naturally understood by humans as applying to all, such as "do not kill." Positive in the context of positive law means "formally laid down or imposed"; it's a synonym of prescribed. So could it be that "positively no trespassing" and "positively no admittance" mean at their core "as is formally laid down or imposed, no trespassing/admittance" or "by the force of law, no trespassing/admittance"?

However appealing the theory is, we require evidence to confirm it, and early evidence of the phrases "positively no trespassing" and "positively no admittance" show no such direct connection:

This is Congressman White's district. His palatial home, out on Lake avenue, you have the privilege of looking at from a distance. It fronts Lake Erie, with many other aristocratic homes and for a distance of several miles the common herd of humanity is informed by big, black letters that "this is private property and positively no trespassing."
— People's Voice (Wellington, Kansas), 5 May 1893

Y.M.C.A. Tennis Court: The following rules of the Young Men's Christian Association tennis court have been posted on the grounds, and each member using the courts is expected to comply with them: 1. Positively no trespassing. 2. No smoking allowed on the grounds. 3. …
— Riverside Daily Press (Riverside, California), 16 May 1899

When we reached the building, he led me up some stairs to a small room, the door of which was locked, and on it the following inscription—"Positively no admittance."
— The Radical (Bowling Green, Missouri), 23 July 1842

It looks like rather than positively having a legal significance in these old examples, it is simply used for emphasis, much as it is today. The more likely explanation for the odd ring to modern instances of "positively no trespassing/admittance" is that the word positively is so easily applied to contexts involving pie these days that the word has lost some of its weightiness, non-legal though it may have always been.

And so it is that linguistic exploration can sometimes yield disappointing results. We recommend pie as consolation in such cases.