The staff at Merriam-Webster is always thrilled when people leave comments explaining why they have chosen to look up some particular word, as this often will shed light on linguistic matters such as functional shift and semantic drift. However, sometimes our users will submit comments or questions which (unintentionally, we are sure) cause consternation and soul-searching on the editorial floor such that no words are defined for the day. Take, for instance, the response left by a user who was looking up the word iconic:

I was wondering why people throw that word around without a clue as to what it means....Justin Bieber is hardly iconic, for example. 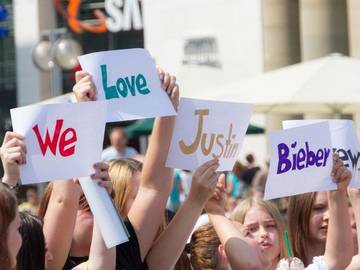 We're not music critics, but we can analyze the word itself.

Is Justin Bieber iconic? This is a question with which every dictionary, whether great or small, must someday wrestle. When one examines the evidence, it becomes clear that there are certainly a fair number of people who do employ the word icon in reference to him.

Plenty of Montclairians responded to Bieber’s arrival with avowed disinterest—“I’ve used behavioral techniques with our children so that whenever someone says the words Justin Bieber they hear instead Sviatoslav Richter,” Lee Siegel, a writer who lives in town, said—and even longtime Bieber fans weren’t quite sure what to do with the fact that their icon had disrupted their suburban existence.
— Reeves Wiedeman, Vulture (New York, NY), 2 Oct. 2017

But the obvious political despots and historical heavy-hitters are just the half of it; there are also the foreign state cultists, the foreign state capturers (the Guptas), the hopeless inventor (Thomas Midgley), the Twitter inventor (Jack Dorsey) and the talentless icons of modern celebrity-dom (Kim Kardashian, Justin Bieber).
— The Star (Johannesburg, South Africa), 18 Nov. 2017

If one is an icon, must that mean that one is also iconic? There appears to be a sentiment of late that iconic has become devalued through overuse, putting aside the matter of whether or not it is appropriate to refer to Bieber thusly.

When, for the love of God, will the word "iconic" finally die?…. At this point "iconic" doesn't mean much more than whooshy, and as these sort of curves are now not so unusual on the world's many wannabe icons, we are left only with a debate as to whether the Walkie Talkie has a better class of whooshiness.
— Rowan Moore, The Observer (London), 4 Jan. 2015

It is true that iconic appears to be in a state of flux; the sense that we define as “widely known and acknowledged especially for distinctive excellence” is increasingly replaced by the sense we define as “widely recognized and well-established,” and it is possible that both of these senses will one day by replaced by something that we will define as “whooshy.” However, before you get too invested in the ‘Frank Sinatra and Sarah Vaughan are iconic, and Justin Bieber is not’ line of thought, it is worth noting that this “distinctive excellence” sense of the word is not the original meaning.

Iconic first meant “of, relating to, or having the characteristics of an icon,” and in early use this icon simply referred to an image, or pictorial representation of something. The word was used very infrequently in the 18th century, and then came into more common usage in the 19th. Iconic was preceded by about a hundred years in this “pictorial” sense by iconical, which meant much the same thing, and which has become obscure enough that no one has ever used the word to refer to a young Canadian singer.

Thus we find that Mind is more excellent than the whole Visible World, which may not improperly be called original Matter; And that this, in proportion, is more excellent than Iconic Matter, or the World which we behold as in a Looking-Glass, or that other before mention’d, which is spread on a piece of Paper, in a Camera Obscura.
— Arthur Collier, A Specimen of True Philosophy, 1730

To those we may add Calamis and Callimachus, remarkable for the lightness and elegance of their productions, with Dameas, who made an iconic statue or portrait of Milo, and Pythagoras of Rhegium, who has received extraordinary praise from Pausanias for his statue of Anthymus, the pugilist.
— The Critical Review (London), July 1816

So is Bieber iconic or not? As with so many other questions about words of a polysemous nature, it all depends on which sense you choose to use. In other words, he is if you want him to be. The sense of iconic which may be loosely defined as “musicians of my generation are iconic, while musicians of your younger generation are not, because clinging to this semantic foothold is how I rage against the dying of the light” is a fairly new one, not coming into general printed use until the second half of the 20th century. In other words, the sense of the word that many people are claiming should not be applied to figures such as Justin Bieber is not much older than... Justin Bieber.