Keep your eye on the differences

When referring to a person who is in the process of pocketing bribes, gathering ill-gotten gains, or engaging in financial chicanery of some other stripe it is important to use the proper nomenclature to describe them. For instance, it wouldn’t do to call someone a boodler, when they are actually a sharper - such things just aren’t done. In this spirit of accuracy let us turn to a question, which, while it has not gathered the same degree of attention as the matter of affect & effect, is in its own way no less important: is there a difference between grifter and grafter?

The answer, you will doubtless be pleased to hear, is a resounding ‘maybe.’ 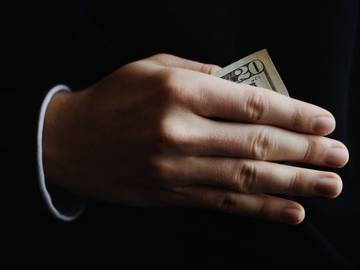 A grifter is one who grifts, a verb that we define transitively as “to obtain (money) illicitly (as in a confidence game)” and intransitively as “to acquire money or property illicitly.” A grafter is, similarly, one who grafts, but this word has a considerably broader meaning than does grift, with senses ranging from “to propagate (a plant) by grafting” to “to implant (living tissue) surgically.” Graft may also mean “the acquisition of gain (such as money) in dishonest or questionable ways” and “to get (illicit gain) by graft,” the definitions that are most relevant to the matter at hand.

So while both words are concerned with illicit gains, and grift is thought to have evolved from graft, they have subtle differences in meaning. Grafter came into use earlier, dating to the middle of the 19th century, initially with the primary meaning of “thief.”

It always has been and always will be so to the end of time, that where there is a “go-a-way” or “break-up” there is sure to be close by a “crib” for the “grafters” to “namasi” into when there is a “tumble” to “square” themselves and double bank the fly “cops.”
— The National Police Gazette (New York, NY), 24 Jun. 1871

Grifter begins to turn up in print in the very beginning of the 20th century; our earlier record currently is from 1902.

The special “write-up” grifter is getting in his work, ever at Des Moines, and we are surprised to see the Register allow its pages to be used as the vehicle through which he gets his wares to the public, and by which he robs the merchants with his worthless trash.
— The Waterloo Courier (Waterloo, IA), 14 Apr. 1902

Both words were used initially to refer to some kind of thief. Within several years, however, we begin to see grifter being contrasted with grafter, and often being specified as the kind of swindler who works the sideshows in carnivals.

We now have both grafters and grifters. Grafters, as everyone knows, are those who separate us from our earned or unearned increment in the ordinary course of business. Grifters do not pursue the ordinary channels. It may be that they are afraid of the grafters, or it may be that they are just observing the common ethics of “working the other side of the street.” At any rate, grifters keep out of the legitimate channels of commerce and resort to unique and extraordinary practices. Grifting is far more sensational and spectacular than grafting, and commands less respect.
— The St. Louis Republic (St. Louis, MO), 17 Oct. 1904

Some of the grafters that have been run in here this week may turn out to be “grifters.” If they do not, it will be humiliating, we think, for it is no longer popular to catch boodlers or grafters, but grifters, as they are the latest discovery in the criminology catalogue.
— Pemiscott Press (Caruthersville, MO), 28 Oct. 1904

All the big grafters—or more properly speaking, “grifters”—were at work in the side show, where the “easy marks” throng.
— The Daily Republican (Rushville, IN), 29 Jun. 1908

Archibald was no cheap grafter or con man. He was a grifter, spelled with a patch worn over the eye. That, in the language of circuses and sideshows and county fairs, indicates that Archie’s mission in life was to trim boobs, no matter what the process, and trimming them with quickness and dispatch in order to meet train schedules.
— Chicago Tribune, 30 Jul. 1911

One of the problems in differentiation between grifter and grafter is that there appears to be a certain fluidity of meaning in early use, particularly with grafter. The grifter is a small-time confidence man, a carnival swindler, or thief of some sort or other. The grafter may be most of these things, but also may be someone who engages in the “political corruption” sense of the word graft (which we define as “the acquisition of money, position, or other profit by dishonest or questionable means, as by actual theft or by taking advantage of a public office or a position of trust or employment to obtain fees, perquisites, profits on contracts, or pay for work not done or service not performed”).

So should you choose grifter or grafter? Quite often the choice is dependent on which of the two words rolls off your tongue or pen more easily; the semantic overlap allows each to be used interchangeably in many circumstances (as when describing small-time crooks or fraudsters). If you are describing someone who is engaged in the grand old tradition of gobbling money from the public trough, then it is perhaps more accurate to choose grafter over grifter.